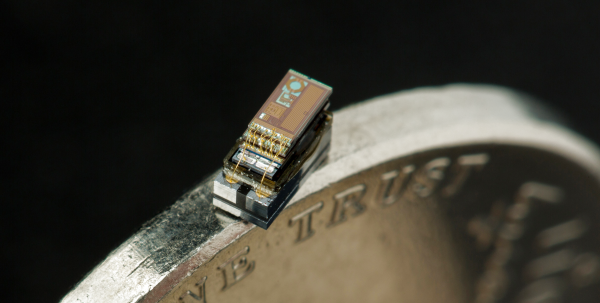 If you want to track a snail, you need a tiny instrumentation package. How do you create an entire data acquisition system, including sensors, memory, data processing and a power supply, small enough to fit onto a snail’s shell?

Throughout history, humans have upset many ecosystems around the world by introducing invasive species. Australia’s rabbits are a famous example, but perhaps less well-known are the Giant African land snails (Lissachatina fulica) that were introduced to South Pacific islands in the mid-20th century. Originally intended as a food source (escargot africain, anyone?), they quickly turned out to be horrible pests, devouring local plants and agricultural crops alike.

Not to be deterred, biologists introduced another snail, hoping to kill off the African ones: the Rosy Wolfsnail (Euglandina rosea), native to the Southeastern United States. This predatory snail did not show great interest in the African intruders however, and instead went on to decimate the indigenous snail population, driving dozens of local species into extinction.

One that managed to survive the onslaught is a small white snail called Partula hyalina. Confined to the edges of the tropical forests of Tahiti, biologists hypothesized that it was able to avoid the predators by hiding in sunny places which were too bright for E. rosea. The milky-white shells of P. hyalina supposedly protected them from overheating by reflecting more sunlight than the wolf snails’ orange-brown ones.

This sounds reasonable, but biologists need proof. So a team from the University of Michigan set up an experiment to measure the amount of solar radiation experienced by both snail types. They attached tiny light sensors to the wolf snails’ shells and then released them again. The sensors measured the amount of sunlight seen by the animals and logged this information during a full day. The snails were then caught again and the data retrieved, and the results proved the original hypothesis.

So much for science, but exactly how did they pull this off? END_OF_DOCUMENT_TOKEN_TO_BE_REPLACED