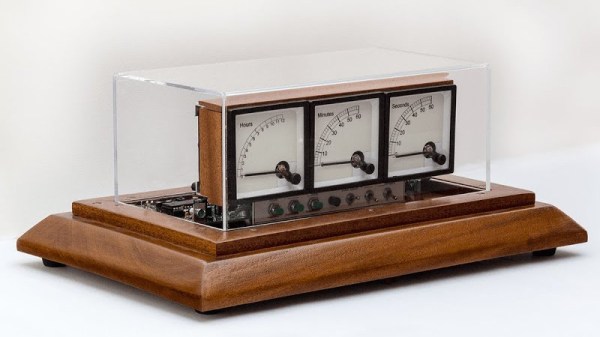 Voltmeters are cheap, and have a great industrial aesthetic about them. This makes them prime candidates for hackers looking to do a clock build. [Brett Oliver] went down this very road, and built a very stylish timepiece along the way.

[Brett] initially wanted to go with 240-degree voltmeters, however the cost was prohibitive, so settled for the more common 90-degree models. New dials were produced by first sanding down the old dials, repainting in an old-fashioned off-white, and then applying the new graphics with inkjet transfer paper.

The attention to detail continues with the case. [Brett] aimed to build the clock with an old-school lab equipment aesthetic. A large piece of mahogany was crafted into the base.  A clear plastic cover was sourced from eBay, which really makes the piece. Large buttons and toggle switches were chosen to complete the look.

On the electronic side of things, it’s all run by a PIC16F628A, which controls the voltmeters via PWM. Running with a 20MHz crystal, the PIC is not a great timekeeper. Instead, the whole show is synchronized to [Brett]’s master clock we featured a few years back.

Building a clock is a rite of passage for a hacker, and [Brett]’s example goes to show how craftsmanship can really pay off in this pursuit. Video after the break.
END_OF_DOCUMENT_TOKEN_TO_BE_REPLACED

We’ve seen many clocks here over the years. Some of them are conventional, some esoteric. So it’s not often that we see something novel in the world of timekeeping.

Strictly speaking, [Giulio Pons]’s clock project isn’t new at all. He’s taken a broken multimeter from the 1950s, and with the help of an Arduino Nano and an ESP8266 module, converted it into a clock that indicates the time on the multimeter’s moving-coil meter. He’s wired the multimeter’s front panel controls to the Arduino to operate the thing, and given it a speaker to play alarm sounds. A PIR motion detector activates the clock. In the hours of darkness, a photoresistor brings up a light. Time setting is automatic via the internet. [Giulio] previously experimented with an RTC module but found the network connection made changing time settings easier.

It’s by no means the perfect timepiece. For instance, [Giulio] found that driving the meter from a PWM pin gave different readings depending on the PSU load from other parts such as the light. But the clock does work, and has breathed new life into what might otherwise have remained a piece of junk.

Those of you with long memories might remember a similar project from a few years ago that used unmodified multimeters to display time as voltage. And of course, there are always frequency counter clocks.