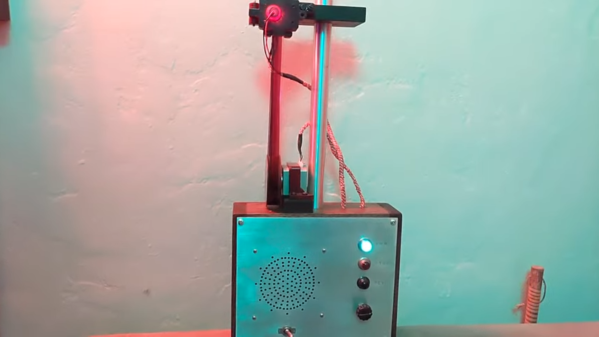 Like many of us, [Emily] found herself on COVID-19 lockdown over the summer. To make the most of her time in isolation, she put together an optical audio decoder for old 16 mm film, built using modern components and a bit of 3D printing.

It all started with a broken 16 mm projector that [Emily] got from a friend. After repairing and testing the projector with a roll of film bought at a flea market, she discovered that the film contained an audio track that her projector couldn’t play. The audio track is encoded as a translucent strip with varying width, and when a mask with a narrow slit is placed over the top it modulates the amount of light that can pass through to a light sensor connected to speakers via an amplifier.

[Emily] used a pair of razor blades mounted to a 3D printed bracket to create the mask, and a TI OPT101 light sensor together with a light source to decode the optical signal. She tried to use a photoresistor and a discrete photodiode, but neither had the required sensitivity. She built a frame with adjustable positions for an idler pulley and the optical reader unit, an electronics box on one end for the electronic components, and another pulley attached to a stepper motor to cycle a short loop of the film.

Most of the projects we see involving film these days are for creating digital copies. You can digitize your old 35 mm photo film using a Raspberry Pi, some Lego pieces, and a DSLR camera, or do the same for 8 mm film with a 3D printed rig. END_OF_DOCUMENT_TOKEN_TO_BE_REPLACED

Most data storage devices we currently use are, at their core, two-dimensional. Sure, a hard drive might have multiple platters, but the data storage takes place on a flat surface. Even an optical drive is effectively a single surface that holds data. At the  City College of New York, they are experimenting with storing data in three dimensions using lab-grown diamonds and LASERs.

Usually, diamonds that have few flaws are more valuable. But in this application, the researchers exploit the flaws to store information. Optical memory that uses a volume instead of a surface isn’t exactly new. However, it is difficult to use these techniques in a way that is rewritable.