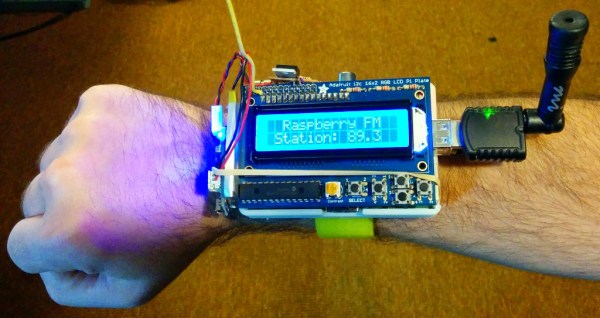 Next time you’re strutting down the block with that hi-fi on you shoulder, don’t subject yourself to the limitations of a radio station’s tight playlist or the short run time of a cassette tape. Pack your tunes on your wrist and beam them directly with this wearable FM transmitter. No wires… it’s like the future is now!

The Raspberry Pi has proven itself to be a dependable FM transmitter. This project follows in those footsteps but moves the goal line a few leaps further. The build has a full user interface which will make it easy to adapt to just about any application you can imagine. And the added twist is shown in the latter third of the video after the break. [Navic209] has included a microphone in the design which allows the wearer to transmit voice to an appropriately tuned radio. It gives the device a very Dick Tracey-esque feel.