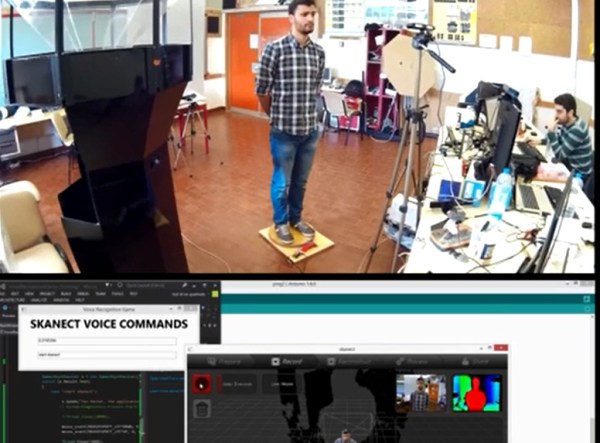 [Aldric Negrier] wanted to make 3D-scanning a person streamlined and simple. To that end, he created this voice-controlled 3D-scanning rig.

[Aldric] used a variety of hacking skills to make this project, and his thorough Instructable illustrates this nicely. Everything from CNC milling to Arduino programming to 3D-printing was incorporated into the making of this rig. Plywood was used to construct the base and the large toothed gear. A 12″ Lazy Susan bearing was attached to this gear to allow smooth rotation. In order to automate the rig, a 12V DC geared motor was attached to a smaller 3D-printed gear and positioned on the base. When the motor is on, the smaller gear’s teeth take the larger gear for a spin. He used a custom dual H-bridge motor driver made by a friend, which is connected to an Arduino Nano. The Nano is also connected to a Bluetooth module and an ultrasonic range finder. When an object within 1-35cm is detected on the rig for 3 seconds, the motor starts to spin, stopping when the object is no longer detected. A typical scan takes about 60 seconds.

This alone would have been a great project, but [Aldric] did not stop there. He wanted to be able to step on the rig and issue commands while being scanned. It makes sense if you want to scan yourself – get on the rig, assume the desired position, and then initiate the scan. He used the Windows speech recognition SDK to develop an application that issues commands via Bluetooth to Skanect, a 3D-scanning software. The commands are as simple as saying “Start Skanect.” You can also tell the motor to switch on or off and change its speed or direction without breaking form. [Aldric] used an Asus Xtion for a 3D-scanner, but a Kinect will also work. Afterwards, he smoothed his scans using MeshMixer, a program featured in previous hacks.

Check out the videos of the rig after the break. Voice commands are difficult to hear due to the background music in one of the videos, but if you listen carefully, you can hear them. You can also see more of [Aldric’s] projects here or on this YouTube channel.

END_OF_DOCUMENT_TOKEN_TO_BE_REPLACED 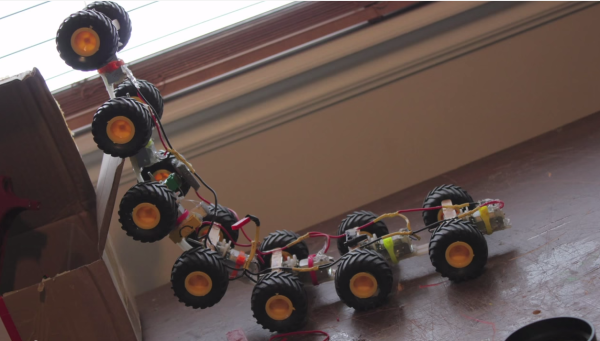 What do you get when you cross 7 hobby gearboxes with 14 wheels and a LiPo battery? Instead of speculating an answer, we can just check out one of [rctestflight’s] projects.

He came across those hobby gearboxes and thought it would be fun to build a 14 wheel drive contraption. Each gearbox has its own motor and is wrapped up in a nice tidy package also including the axle and wheels. All of the wheels mounted on a straight board wouldn’t be much fun so [rctestflight] used heavy duty zip ties that act as a flexible frame to connect one gearbox to the next. This allows the vehicle to bend and climb over obstacles while keeping as many wheels in contact with the ground as possible.

All 7 motors are powered by a single cell LiPo battery. In the video after the break it appears the vehicle can steer or that it is remotely controlled, but that is not the case. Once the battery is plugged in it just goes forward. This isn’t the first time one of [rctestflight’s] projects has been featured on Hackaday, check out his Free Falling Quadcopter Experiment.

END_OF_DOCUMENT_TOKEN_TO_BE_REPLACED 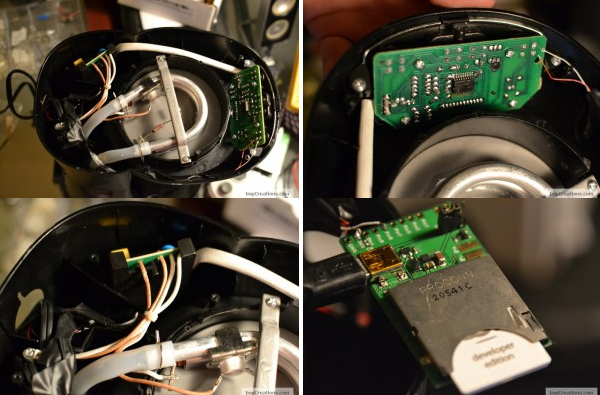 Coffee. The lifeblood of our society. The sweet nectar of bean, whose chemical compound makes us feel so, so good. Doesn’t it deserve a place in the Internet of Things? [Matt] and [Don] thought so — so they connected their old coffee pot to their phones.

After receiving their developer version of the Electric Imp board, the two started thinking of small projects to test it out on; ones that might even have a real-world application. Since the Imp is capable of receiving inputs via the web, it’s super easy to write an app to control things — in this case, a coffee pot.

Hardware-wise it was actually pretty simple. The coffee pot control board provides power for the Imp, and the On/Off switch of the coffee maker is wired to one of the Imp’s outputs. One simple app later, and boom we have wireless java capabilities. Heh. Java.

END_OF_DOCUMENT_TOKEN_TO_BE_REPLACED

If you’re a maker business, making the things is usually your chief concern, whether you’re 3D printing widgets or milling them. But if you don’t put enough time and energy into things like client interaction and payments, you may find that you don’t have customers. [Mike Moceri] was tired of bloated systems like Salesforce that cost entirely too much for what they are. He created makerOS to help maker businesses be more effective without wasting time, starting with his own—a Detroit-based 3D printing, design, and prototyping firm called Manulith.

When a business registers with makerOS, they get a custom subdomain. makerOS is white-label software that provides a dashboard for the business owner and opens the lines of communication between maker and client. The client sees their own dashboard, and here they can can fill out a short form to describe what they want and upload photos and files from common cloud services. The dashboard provides a simple way to quote products and services, take payments, and facilitate discussion between manufacturer and client through a sort of wall/bulletin board which supports @ mentions and push notifications.

It’s free to register a subdomain with makerOS and install it on your existing site. The minimal costs associated are transaction based and flexible as your company grows. 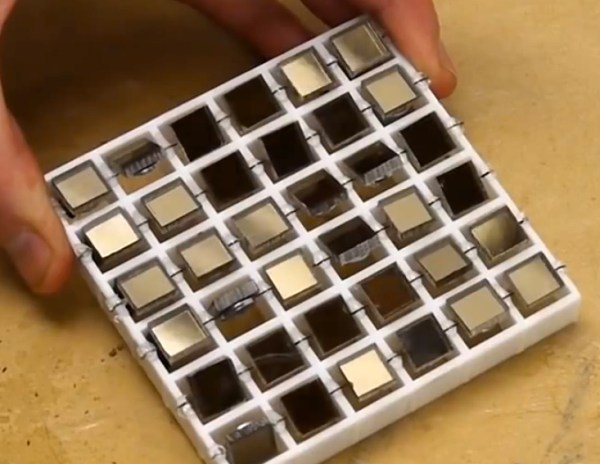 Did you know there are a million little mirrors flickering back and forth, reflecting light within some modern projectors; like a flip-dot display but at the micro level? In his video, [Ben Krasnow] explains the tiny magic at work in DLP, or digital light processing technology with a scaled up model he constructed of the moving parts.

LCD projectors work much like old slide projectors. Light is shined through a transparent screen containing the image, which is then focused and enlarged through a lens. DLP projectors however achieve the moving image in a slightly different way. A beam of focused light is shined onto a chip equipped with an array of astonishingly small mirrors. When the mirror is flipped in one direction, it reflects the light out through the lens and creates a visible pixel. When the mirror is tilted the opposite direction, no light is reflected and the pixel is dark. All of these tiny moving parts are actuated by means of static electricity, and since a pixel can effectively only either be in an on or off state without any range of value in-between, the pixel must flutter at a rate fast enough to achieve the illusion of intensity, much like pulsing an LED to create a dimming effect.

In addition to slicing open the protective casing of one of these tiny micro-mirrored chips to give us a look at their physical surface under a microscope, [Ben] also built his own functioning matrix from tiles of mirrors and metal washers sandwiched around pieces of string. A wound electromagnet positioned behind each tile tilts the pixel into position when a current is run through the wire — although he didn’t sink the time needed to build out the full array in this manner (and we don’t blame him). If you do have the time and add in a high powered flash-light, this makes for an awesome way to shine messages on your roommate’s wall.

END_OF_DOCUMENT_TOKEN_TO_BE_REPLACED

[Jason Kridner] – the BeagleBone guy – headed out to the Midwest RepRap Festival this weekend. There are a lot of single board computers out there, but the BeagleBoard and Bone are perfectly suited for controlling printers, and motion control systems thanks to the real-time PRUs on board. It’s not the board for you if you want to play retro video games or build a media center; it’s the board for building stuff.

Of interest at the BeagleBooth were a few capes specifically designed for CNC and 3D printing work. There was the CRAMPS, a clone of the very popular RAMPS 3D printer electronics board made for the Beagle. If you’re trying to control an old mill that is only controllable through a parallel port, here’s the board for you. There are 3D printer boards with absurd layouts that work well as both printer controller boards and the reason why you should never come up with the name of something before you build it.

[Jason]’s trip out to MRRF wasn’t only about extolling the virtues of PRUs; Machinekit, a great motion control software, was also there, running on a few Beagles. The printer at the BeagleBooth was running Machinekit and apart from a few lines of GCode that sent the head crashing into the part, everything was working great.