If you are a traditional programmer, using bash for scripting may seem limiting sometimes, but for certain tasks, bash can be very productive. It turns out, some of the limits of bash are really limits of older shells and people code to that to be compatible. Still other perceived issues are because some of the advanced functions in bash are arcane or confusing.

Strings are a good example. You don’t think of bash as a string manipulation language, but it has many powerful ways to handle strings. In fact, it may have too many ways, since the functionality winds up in more than one place. Of course, you can also call out to programs, and sometimes it is just easier to make a call to an awk or Python script to do the heavy lifting.

But let’s stick with bash-isms for handling strings. Obviously, you can put a string in an environment variable and pull it back out. I am going to assume you know how string interpolation and quoting works. In other words, this should make sense:

The Long and the Short

Suppose you want to know the length of a string. That’s a pretty basic string operation. In bash, you can write ${#var} to find the length of $var:

END_OF_DOCUMENT_TOKEN_TO_BE_REPLACED

I once asked a software developer at work how many times we called fork() in our code. I’ll admit, it was a very large project, but I expected the answer to be — at most — two digits. The developer came back and read off some number from a piece of paper that was in the millions. I told them there was no way we had millions of calls to fork() and, of course, we didn’t. The problem was the developer wasn’t clear on the difference between a regular expression and a glob.

Tools like grep use regular expressions to create search patterns. I might write [Hh]ack ?a ?[Dd]ay as a regular expression to match things like “HackaDay” and “Hack a day” and, even, “Hackaday” using a tool like grep, awk, or many programming languages.

END_OF_DOCUMENT_TOKEN_TO_BE_REPLACED

Under the old MSDOS system, the first program would run to completion, spooling its output to a temporary file. Then the second program will run, reading input from the same file. With Linux and most other modern operating systems, both programs will run together with the input of the second program connected to the first program’s output. END_OF_DOCUMENT_TOKEN_TO_BE_REPLACED

Although bash scripts are regularly maligned, they do have a certain simplicity and ease of creation that makes them hard to resist. But sometimes you really need to do some heavy lifting in another language. I’ll talk about Python, but actually, you can use many different languages with this technique, although you might need a little adaptation, depending on your language of choice.

Of course, you don’t have to do anything special to call another program from a bash script. After all, that’s what it’s mainly used for: calling other programs. However, it isn’t very handy to have your script spread out over multiple files. They can get out of sync and if you want to send it to someone or another machine, you have to remember what to get. It is nicer to have everything in one file.

END_OF_DOCUMENT_TOKEN_TO_BE_REPLACED 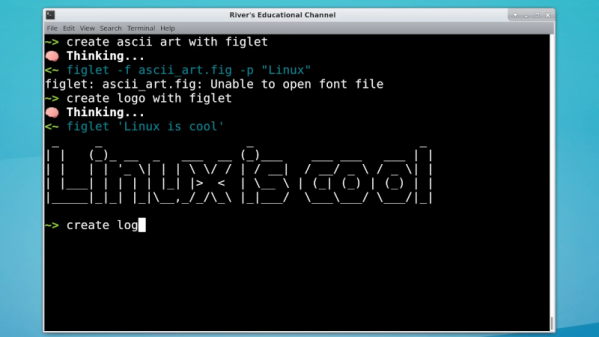 We are always envious of the Star Trek Enterprise computers. You can just sort of ask them a hazy question and they will — usually — figure out what you want. Even the automatic doors seemed to know the difference between someone walking into a turbolift versus someone being thrown into the door during a fight. [River] decided to try his new API keys for the private beta of an AI service to generate Linux commands based on a description. How does it work? Watch the video below and find out.

Some examples work fairly well. In response to “email the Rickroll video to Jeff Bezos,” the system produced a curl command and an e-mail to what we assume is the right place. “Find all files in the current directory bigger than 1 GB” works, too.

END_OF_DOCUMENT_TOKEN_TO_BE_REPLACED

You need to package up a bunch of files, send them somewhere, and do something with them at the destination. It isn’t an uncommon scenario. The obvious answer is to create an archive — a zip or tar file, maybe — and include a shell script that you have to tell the user to run after unpacking.

That may be obvious, but it assumes a lot on the part of the remote user. They need to know how to unpack the file and they also need to know to run your magic script of commands after the unpack. However, you can easily create a shell script that contains a file — even an archive of many files — and then retrieve the file and act on it at run time. This is much simpler from the remote user’s point of view. You get one file, you execute it, and you are done.

In theory, this isn’t that hard to do, but there are a lot of details. Shell scripts are not compiled — at least, not typically — so the shell only reads what it needs to do the work. That means if your script is careful to exit, you can add as much “garbage” to the end of it as you like. The shell will never look at it, so it’s possible to store the payload there.