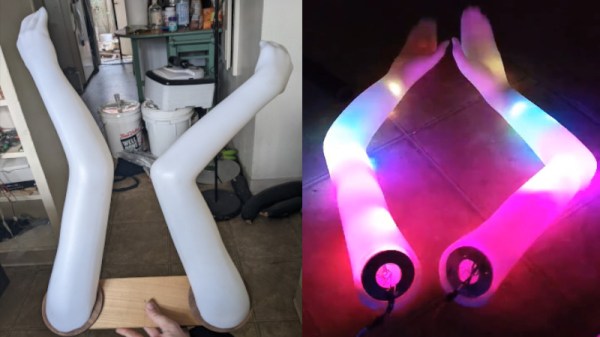 Music visualizers were all the rage back in era of Winamp and Windows Media Player. They’re even cooler when they don’t just live on your computer screen, though, as [Emily Velasco’s] latest project demonstrates.

The build consists of two mannequin arms on a board mounted on the wall. The arms were sourced for just $5 from a Sears that went out of business, and originally fastened to the mannequin thanks to magnets inside. Thus, putting two steel plates on the board allowed the arms to be attached, and they can be freely arranged as [Emily] sees fit.

The ESP32-based Pixelblaze LED controller serves as the brains of the operation, controlling LEDs mounted inside the arms themselves. Using a dedicated controller makes working with addressable LEDs a cinch. As a further bonus, the board serves up a web interface, allowing patterns to be changed without having to hook up a cable to the device. Meanwhile, a sensor board inside the arms uses a microphone to enable the light show to react to sound and music.

It’s one of the more obscure uses for an old mannequin, but definitely one that appeals to our love of everything that flickers and glows. It’s a build very much up [Emily’s] alley; as a prolific maker, she loves to build weird and wonderful creations, as shared during her talk at the 2019 Hackaday Superconference. Video after the break.