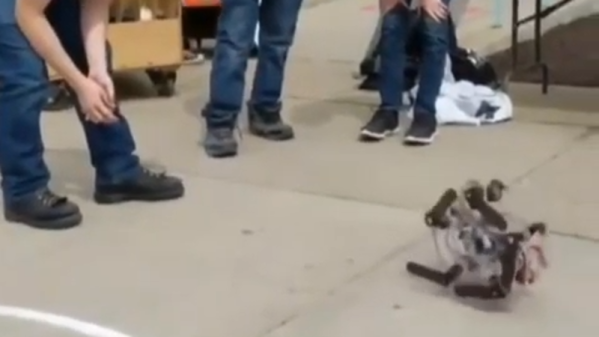 It’s not every day that we see someone trying something new with robot locomotion, but [kong]’s robot Rollyboi was made to do exactly that by mixing up the usual robot-wheel-motor layout. Instead of the robot using motors to drive wheels, Rollyboi is itself the wheel, and uses multiple simple arms (legs?) attached to hobby servo motors to propel itself. The idea is that the arms swivel out one at a time to roll the robot along as needed.

It’s a novel idea, but how well does it work in practice? The first version was blind and mechanically unstable, with no idea which way was up and therefore no way to effectively control which arm needed to be extended, but was nevertheless able to roll along. The next version implemented a simple control system: buttons installed along the outside rim let the robot know how it is moving and which arm to extend next. With two sets of arms (one on each side) the robot becomes capable of executing simple turns by extending one arm more than the other.

In the end, Rollyboi could move but still lacks a means to perceive and navigate its environment. This is made more challenging by the fact that the robot’s body (and therefore any sensors mounted to it) would be in constant motion as the robot moves. Still, it’s interesting to see how far the idea went using only simple hardware, and its motion gives off a certain radial solenoid engine vibe. You can watch a brief video below.

END_OF_DOCUMENT_TOKEN_TO_BE_REPLACED 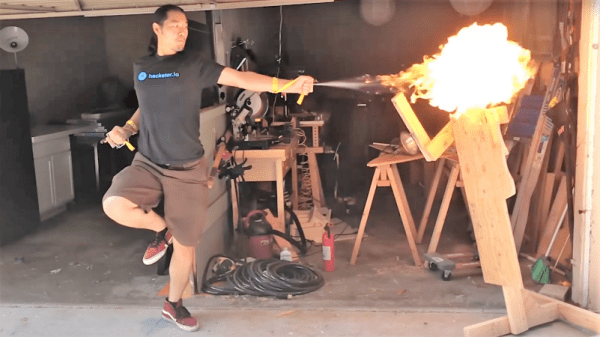 Always wanted to be a citizen of Fire Nation? Here’s one way to ace the citizenship exam: punch-activated flaming kung fu gauntlets of doom.

As with all the many, many, many flamethrower projects we’ve featured before, we’ve got to say this is just as bad an idea as they are and that you should not build any of them. That said, [Sufficiently Advanced]’s wrist-mounted, dual-wielding flamethrowers are pretty cool. Fueled by butane and containing enough of the right parts for even a minimally talented prosecutor to make federal bomb-making charges stick, the gauntlets each have an Arduino and accelerometer to analyze your punches. Wimpy punch, no flame — only awesome kung fu moves are rewarded with a puff of butane ignited by an arc lighter. The video below shows a few close calls that should scare off the hairy-knuckled among us; adding a simple metal heat shield might help mitigate potential singeing.

Firebending gloves not enough to satisfy your inner pyromaniac? We understand completely.

END_OF_DOCUMENT_TOKEN_TO_BE_REPLACED 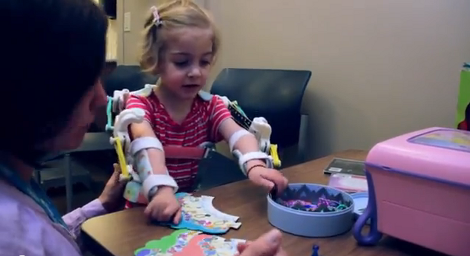 This 2-year-old girl has a condition called arthrogryposis which causes her not to be able to move her arms. But with a little help, her muscles can be strengthened to achieve more normal use of her limbs. This is not the first time that an exoskeleton has been used, but the advent of 3D printed parts makes the skeleton work much better.

Previous exoskeletons were made of metal and were quite heavy. When you’re talking about a 25 pound child every extra ounce counts. Moving to plastic parts lightened the load. Now the structure can be mounted on her torso, using rubber bands to aid her movement until her muscles are strong enough to do it on their own.

Of course to [Emma] this isn’t an exoskeleton. It’s her set of magic arms.