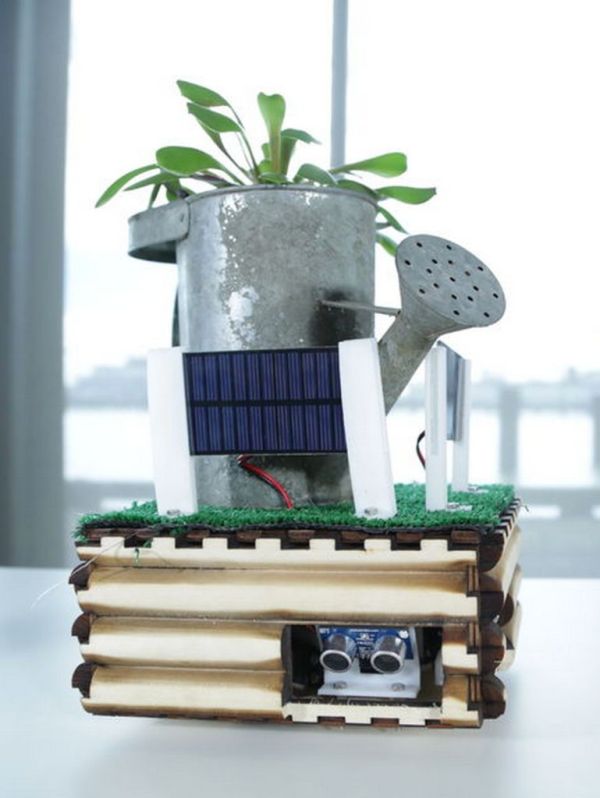 There are two types of people: ones with green thumbs, and ones that kill their cacti  because they forgot to water them for over a year. Sadly, we are of the latter group. We currently have a resilient spider plant that looks like it could use more sun. Now there’s a way for it to catch those rays wherever they may shine, thanks to [Dot Matrix] of Instructables. She made a mobile planter that actively seeks out sunlight.

The planter’s base was made of plywood, topped with fake grass and a watering can to hold the plant. Anything above the planter base can be modified to whatever desired aesthetic. A CRT planter may be too heavy, but there are countless ways to personalize it. [Dot] used an Afinia 3D printer to make various mounts and brackets with ABS plastic. The planter was controlled by an Arduino Micro and used a pair of 0.5W solar panels and Parallax PING))) sensors to decide how it should move from its current position. If the planter would fall or hit an object moving forward, it would reverse and turn on wheels powered by Parallax continuous rotation servos. It would evaluate its new position, repeating the process if it was in danger. Once the planter was safe, it used the solar panels to detect the most sunlight: the sum of the panels determines the area’s brightness while the individual panels’ readings were used to move the planter towards a brighter area. The sun-seeking continued until the sunniest spot was found (defined in the code). Here, the planter remained idle for 10 minutes before restarting the process.

We think [Dot’s] planter is a fun way to keep plants happy and healthy in spite of us. See a video of the planter after the break.

END_OF_DOCUMENT_TOKEN_TO_BE_REPLACED It does make us sad to see all the waste generated as we move from CRT monitors and televisions to flat panel offerings. Here’s a way to cut down just a bit on how much is going to waste. [Denizpa] turned a CRT monitor into a planter.

The project is very straight-forward. First remove the plastic body from the electronic guts. Next you’ll want to choose your paint colors. While you’re at the home store, pick up a sanding sponge as well. [Denizpa] used 320 grit to sand all of the outside surfaces to help ensure the paint would bond well. Once the paint dried four plastic corner brackets were screwed in place to add some interest to the bottom of the planter. It’s not quite time to plant though, there’s way too many holes in the case to just fill it up with soil. A black plastic garbage bag serves as a liner and completes the project.

No mention on what to do with the guts you removed. If you have an idea let us know in the comments section. 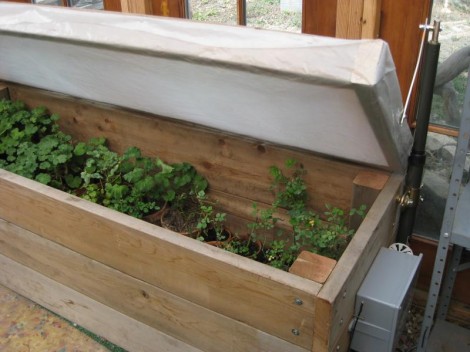 [Craig] tried heating his greenhouse last winter, but really only managed to push the limits of his utility bills. This time around he took a different approach by building a system to warm the soil in which his vegetation is planted.

The core of the system is this box which houses the plants. It is lined with heating tape along the bottom which warms a layer of dirt. The plants are in pots, but since those are surrounded by the dirt it doesn’t really inhibit the warming properties of the soil. The controller takes into account the temperature inside the box, as well as ambient temperature in the greenhouse. When it’s a bit too cold the controller will close the lid, which is covered with translucent plastic. This makes sure the temperature around the plants won’t fall below about 41.5 degrees Fahrenheit.

This really takes the work out of caring for you plants in the winter. What would have been a multiple-times-per-day visit can be limited to every day or two. Now he just needs to expand this to regulate temperature and humidity in the greenhouse itself, kind of like this other hack.