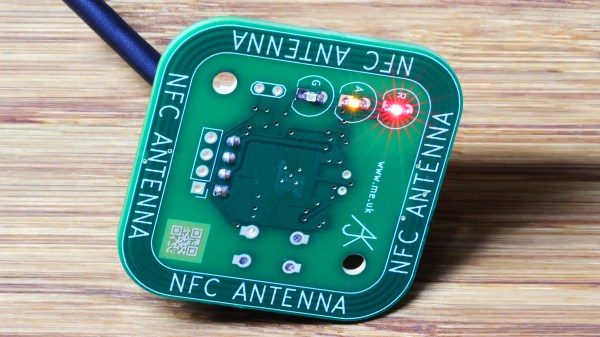 [RevK] wanted to learn about NFC readers, and we agree that the best way to do so is to dive in and build one yourself.

There are readers available from multiple sources, but [RevK] found them either compact but with no prototyping space or plenty of prototyping space and a large footprint. High-speed UART (HSU) was selected over I2C for communication with an ESP32 as testing showed it was just as fast and more reliable over long distances at the cost of only one additional wire.

After a few versions, the resulting PN532 based NFC reader has just enough GPIO for a doorbell and tamper switch and three status LEDs, with board files and a 3D-printed case design included in the open source project on GitHub. When looking into the project, we appreciated learning about tamper switches that can include closed or open contact status when an NFC is read, most often used in the packaging of high-value and collectible products. If you have worked with this tamper feature of NFCs, let us know about it.

Thanks for the tip, [Simon]