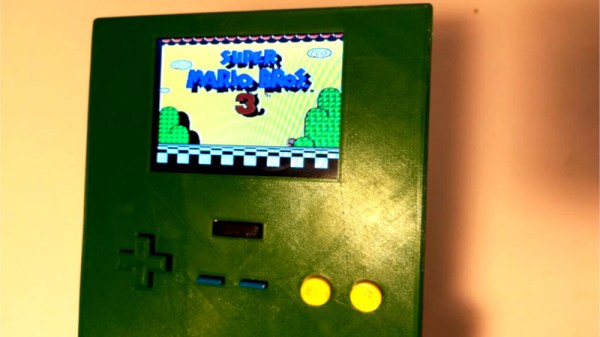 Emulation of classic consoles has long been a solved problem. It’s now possible to run thousands of vintage games on a computer the size of a stick of gum, and to do so with all the benefits emulation brings. [M-Parks] isn’t the biggest fan, however – and decided to build a slimline NES handheld instead. The goal was to produce a portable NES in as compact a package as possible.

Things have come a long way in the handheld console modding scene in the last ten years. 3D printing has largely replaced vacuum forming, and it’s no different here. [M-Parks] modeled up a case and sent it off to be 3D printed in PLA, somewhat mimicking the general layout of the original Game Boy. It’s a little larger, but given that it accepts full-size original NES carts, it can only be so small.

A Retro-bit NES-on-a-chip console was used to provide the motherboard and cartridge connector for the build. Rounding this out is a power supply from Adafruit, an LM386 audio amplifier, as well as a digital volume control which is a nice touch.

While such a build may sound daunting to the absolute beginner, all it takes is a soldering iron, some hot glue, and a willingness to have a go. There’s nothing wild or groundbreaking about this build, but to dwell on that would be missing the point. [M-Parks] now has a portable NES to play on those long train rides, and learned some great skills doing it –  a solid result for any project!

If you’re keen on seeing another take, check out [Dave]’s build from a few years back.

[1up] has posted his portable NES as an entry for the Sanyo Eneloop contest. We’ve seen some really cool portable builds, but this one has a complete step by step writeup of the process too. Many of these projects start with the little all in one devices that contain 99 games already. [1up] wanted to use original hardware so you could play any cartridge you could get. He used a complete NES and a portable PS1 screen. The total project cost was roughly $130, if you don’t include all the stuff he broke in the process.

Not only does he make it portable, but also points out easy ways to improve your experience. One example is to disable the lockout chip. This was an anti piracy precaution from Nintendo. If the cartridge doesn’t pass this, it won’t play. Often, games won’t pass due to something as simple dirty contact. He explains all of this and takes you through the process of disabling the chip so everything can run smoother.

He has it all encased in a clear box. Some people prefer a more professional finish, but we have to admit that seeing the guts is pretty cool.