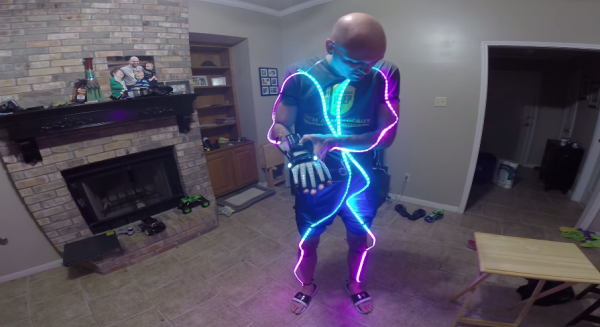 [Greg’s] been playing around with wearable hacks for quite some time now, and he’s decided to add a new twist for his latest LED light suit (Mk 4) — An ancient NES Power Glove to control it.

He was inspired by the band Hypercrush who had a music video where one of the guys was wearing a laser-shooting power glove — awesome. Having already made light suits before, he thought it’d be fun to do something similar.

The suit is controlled by an Arduino Pro Mini which has been hacked into the Power Glove for ultimate button pushing capabilities. He’s using 5 meter LED strips of the classic WS2812  RGB variety, which allow for individual LEDs to be addressed using a single pin. It’s powered by a 5V 2A USB battery pack, and he’s made all the components very modular, you could even say it’s “plug and play”!