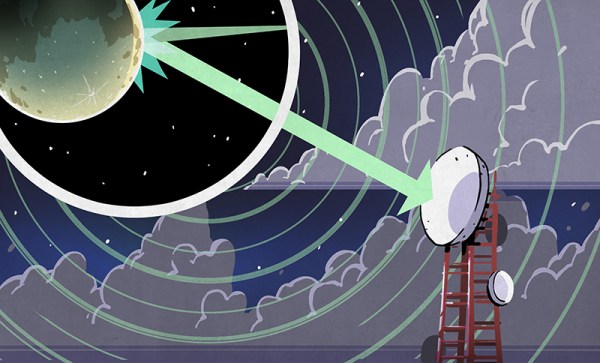 It has to be hard to be a kid interested in radio these days. When I was a kid, there was a lot of interesting things on shortwave. There wasn’t any cable TV (at least, not where I lived) so it was easy to hack antennas and try to pull in weak TV and broadcast stations. The TV stations were especially interesting.

It was one thing for me to build a dish antenna to pick up Star Trek from a station just barely out of range. But sometimes you’d get some really distant TV station. The world’s record is the reception of a BBC TV station in Australia (a distance of 10,800 miles). That’s extreme, but even from my childhood home near New Orleans, I’ve personally picked up TV stations from as far away as New Mexico. Have you ever wondered how that’s possible?

Radio signals behave differently depending on their frequency. The TV frequencies used in the old analog signals were VHF signals (well, the channels between 2 and 13 in the United States, anyway). In general, those signals usually travel through the air, but don’t bounce off any part of the atmosphere. So if you aren’t in a line of sight with the transmitter, you can’t see the broadcast. The other problem is that local stations tend to drown out weak distant stations. A TV DXer (ham lingo for someone trying to hear distant signals) has to wait for local stations to go silent or listen on frequencies where there are no local stations.