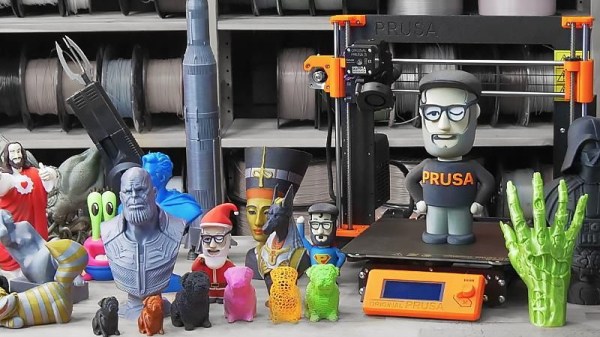 If you own a 3D printer, you’ve heard of Thingiverse. The MakerBot-operated site has been the de facto model repository for 3D printable models since the dawn of desktop 3D printing, but over the years it’s fallen into a state of disrepair. Dated and plagued with performance issues, many in the community have been wondering how long MakerBot is still going to pay to keep the lights on. Alternatives have popped up occasionally, but so far none of them have been able to amass a large enough userbase to offer any sort of real competition.

But that might soon change. [Josef Průša] has announced a revamped community for owners of his 3D printers which includes a brand-new model repository. While clearly geared towards owners of Prusa FDM printers (support for the new SLA printer is coming at a later date), the repository is not exclusive to them. The immense popularity of Prusa’s products, plus the fact that the repository launched with a selection of models created by well known designers, might be enough to finally give Thingiverse a run for its money. Even if it just convinces MakerBot to make some improvements to their own service, it would be a win for the community.

The pessimists out there will say a Prusa-run model database is ultimately not far off from one where MakerBot is pulling the strings; and indeed, a model repository that wasn’t tied to a particular 3D printer manufacturer would be ideal. But given the passion for open development demonstrated by [Josef] and his eponymous company, we’re willing to bet that the site is never going to keep owners of other printers from joining in on the fun.

That being said, knowing that the users of your repository have the same printer (or a variant, at least) as those providing the designs does have its benefits. It allows for some neat tricks like being able to sort designs by their estimated print time, and even offers the ability to upload and download pre-sliced GCode files in place of traditional STLs. In fact, [Josef] boasts that this is the world’s only repository for ready-to-print GCode that you can just drop onto an SD card and print.

Regular Hackaday readers will know that we’ve been rather critical of the decisions made by MakerBot over the last few years, but to be fair we aren’t exactly alone in that respect. The community desperately needs a repository for printable models that’s in somebody else’s hands, and frankly we’re thrilled with the idea it could be [Josef Průša] leading the charge. His printers might not be perfect, and they certainly aren’t cheap, but they definitely don’t fail to impress. Here’s hoping this latest venture will be the same.

END_OF_DOCUMENT_TOKEN_TO_BE_REPLACED

[Alan] has just posted an Ubuntu screencast that will take you through a crash course in the Ubuntu repositories. If you are new to Ubuntu this will give you a much better grasp on how software repositories are handled.

The different types of updates are discussed: Security updates fix bugs that cause a system vulnerability. Updates (generic) are for bug fixes that aren’t a security threat. Proposed updates are for testing before an update hits the ‘updates’ section. Finally, backports are updates from a newer version that have been ‘backported‘ so systems running older versions of Ubuntu can have the benefit of newer features and fixed bugs.

He also provides some tips on selecting package sources (main, universe, restricted, and multiverse), and choosing the fastest mirror to reduce download times. This screencast is just part one and we hope to see 3rd party repositories, personal package archives, and repository caching covered in future installments.