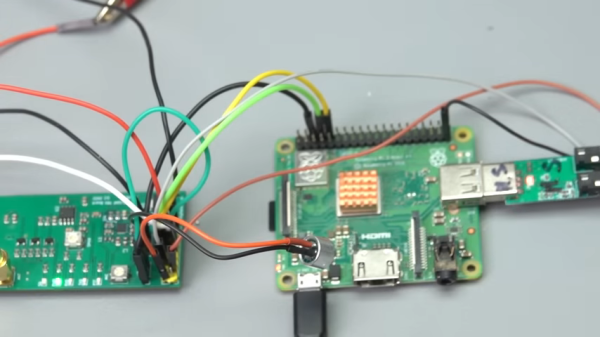 In amateur radio circles, almost no single piece of equipment serves as more of a magnet for controversy than the humble Baofeng handheld transceiver. It’s understandable — the radio is a shining example of value engineering, with just enough parts to its job while staying just on the edge of FCC rules. And at about $25 a pop, the radios are cheap enough that experimentation is practically a requirement of ownership.

But stripped down as the Baofeng may be, it holds secrets inside that are even more tempting to play with than the radio itself. And who better than [HB9BLA], a guy who has a suspiciously familiar Swiss accent, to guide us through the RF module at the heart of the Baofeng, the SA818. For about $8 you can get one of these little marvels off AliExpress and have nearly all the important parts of a VHF or UHF radio — an SDR transceiver, a power amp, and all the glue logic to make it work.

In the video below, [Andreas] puts the SA818 module through its paces with the help of a board that pairs the module with a few accessories, like an audio amp and a low-pass RF filter. With a Raspberry Pi and a Python library to control the module, it’s a decent imitation of the functionality of a Baofeng. But that’s only the beginning. By adding a USB sound card to the Pi, the setup was able to get into every ham’s favorite packet radio system, APRS. There are a ton of other applications for the SA818 modules, some of which [Andreas] mentions at the end of the video. Pocket-sized repeaters, a ridiculously small EchoLink hotspot, and even an AllStar node in an Altoids tin.

Of course, if you want to get in on the fun, you’re going to need an amateur radio license. Don’t worry, it’s easy — we’ll help you get there.