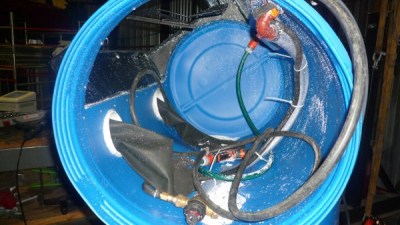 This method of building your own projection screen is new to us. [Sean Michael Ragan] ran across some sand blasting material made up of minuscule glass beads at Harbor Freight and inspiration struck. He purchased a fifty-pound bag and set out to see if it could be used with regular latex paint to create a projection screen. The answer is an absolute yes, but results are dependent on how you apply it.

Now there is paint you can buy which will turn your wall into a projector screen, but it’s expensive. [Sean’s] hack isn’t a direct replacement as he found the results of just mixing the beads with paint and applying them to a vertical surface weren’t up to the standards he’s looking for. But if you build a screen to hang on the wall you can let gravity work for you. He laid the screen flat and applied a heavy coat of paint to the surface. He then sprinkled a heavy coat of the glass bead over the wet paint and let it dry. Finally he cleaned off the material which didn’t stick and hung it on the wall.

Don’t have a projector to use with this hack? No problem, just build your own.