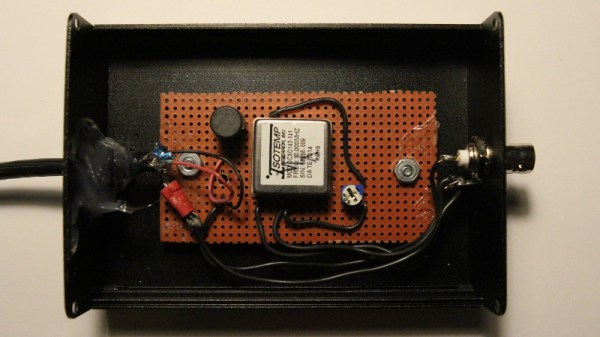 For those of us who like to wrangle electrons from time to time, there are some exceptional deals out there for low (or at least lower) cost imported test equipment. If you’re willing to part with a few hundred dollars US, you can get some serious hardware that a decade ago would have been effectively outside the reach of the hobbyist. Right now you can order a four channel oscilloscope for less than what a new Xbox costs; but which one you’ll rack up more hours staring at slack-jawed is up to you.

Of course, these “cheap” pieces of equipment aren’t always perfect. [Paul Lutus] was pretty happy with his relatively affordable Siglent SDG 1025 Arbitrary Function Generator, but found its accuracy to be a bit lacking. Fortunately, the function generator accepts an external clock which can be used to increase its accuracy, so he decided to build one.

[Paul] starts off by going over the different options he considered for this project, essentially boiling down to whether or not he wanted to jump through the extra hoops required for an oven-controlled crystal oscillator (OCXO). But the decision was effectively made for him when his first attempt at using a more simplistic temperature controlled oscillator failed due to an unfortunate misjudgment in terms of package size.

In the end, he decided to spring for the OCXO, and was able to use the USB port on the front panel of the SDG 1025 to provide the power necessary for the crystal to warm up and remain at operating temperature. After he got the oscillator powered, he just needed to put it in a suitable metal enclosure (to cut down external interference) and calibrate it. [Paul] cleverly used the NIST WWV broadcast and his ears to find when his frequency standard overlapped that of the source, therefore verifying it was at 10 MHz.