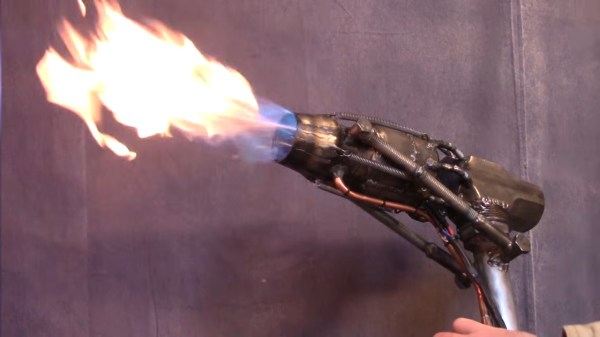 The Fallout series of games has a variety of ridiculous weapons, not least the Super Sledge — a rocket propelled sledgehammer that looks about as dangerous for the wielder as it does for the opponent. [JAIRUS OF ALL] decided he had to recreate this build in real life, risks be damned.

Unwilling to go the single-use, solid rocket route for his build, [JAIRUS] instead elected to go with an electric ducted fan, supplemented with a propane supply for added flames. It’s not really a rocket of any form, and it’s unlikely the burning propane adds any real thrust, but it does shoot huge flames out the back and it is terrifying. The EDF idle speed can be set by a potentiometer on a servo tester hooked up to a speed controller, while there’s a valve for adjusting propane flow. A switch can then be used to boost the EDF speed higher and increase the propane flow, increasing the violence of the flow out the back of the hammer.

Notably, [JAIRUS] doesn’t actually demonstrate swinging the hammer at anything in particular. We’re kind of glad, as we suspect it might end with a sizable explosion, or burns at the very least. Nonetheless, it would easily be the most terrifying prop weapon at most any Halloween party you took it to. It’s in a similar vein to the fire vortex cannon [JAIRUS] also designed. Video after the break.

END_OF_DOCUMENT_TOKEN_TO_BE_REPLACED

[Dan] sent us a link to this Honda U3-X personal transport device. It’s kind of like a Segway that can move in any direction but our head already hurts from the thought of going over backward on one of these.

How light bulb filaments were developed

Now that incandescent light bulbs are about to be outlawed here in the US, we thought you might enjoy learning how the filaments were developed. This another video by [Bill Hammack], the engineer guy, and we’re big fans of his work.

Who needs a PID controlled skillet when you can reflow on this wooden stove? Well maybe not reflow, this is more of a salvage operation.

We’ve seen more than enough Arduino controlled outlets. But if you’re interested in using Javascript to control the Arduino this post may be just what you’re looking for.

[Taylor Hokanson] built a qwerty keyboard that you hit with a sledgehammer. Enough said. [Thanks Larry]