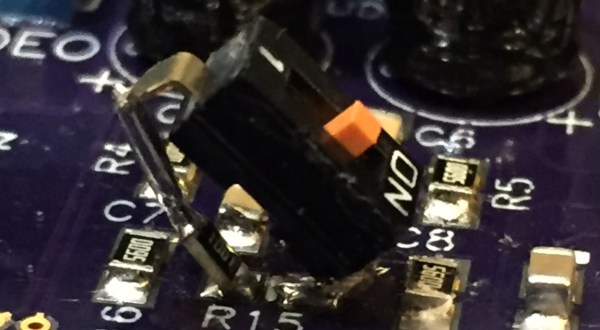 Making revisions to existing PCBs with surface mount components often leads to creative solutions, and this insertion of a switch over a tombstoned resistor is no exception. According to [kubatyszko], “this is an FPGA-based Amiga clone. R15 serves as joint-stereo mixing signal between channels to make it easier on headphone users (Amiga has 4 channels, 2 left and 2 right). Removing R15 makes the stereo 100% ‘original’ with fully independent channels. Didn’t want to make it permanent so I decided to put a switch.”

Whether [kubatyszko] intends it or not, this solution is not going to be permanent without some additional work to mechanically secure the switch. We’ve tried this sort of thing before and it sometimes results in the contact area of the resistor being ripped off the substrate and separated from the rest of the resistor, rendering it useless. However, the creative use of the pads to get some additional functionality out of the board deserves some kudos.

We love creative fixes for board problems but it’s been a really long time since we’ve seen several of them collected in one place. We’d love to hear your favorite tricks so let us know in the comments below.

The nice thing with having a hacker cred is that family and friends are always on the lookout for stuff they think might be useful to you. [Craig Hollabaugh]’s son-in-law found an inspection camera and thought it would be handy for his hobby work. The MagniSight Explorer was first introduced in 2001. It is good for surface mount board work and inspection, except that its analog 480p video is quite dated by today’s standards. So [Craig] upgraded it for crystal clear 1080P/30 video and 5 megapixel images using a $35 Raspberry Pi 2 and a $26 Raspberry Pi Camera Module. After the upgrade, the unit is now a great tool for SMT rework.

There’s not a lot to the upgrade, but [Craig] gives a nice rundown in the 15 minute video of the MagniSight’s internals. He shows us the original analog camera module and its video card, which is able to do some additional processing like black and white output and reverse video (negative). As he mentions, it would be easy for him to do the same via software on the Raspberry Pi. A video camera lens takes care of magnification and two shafts coupled to it via flat belts (rubber bands?) take care of zoom and focus. A front coated mirror angled 45 degrees in front of the lens turns the optical path 90 degrees to allow the lens/camera to “look down”. After experimenting a bit to find the correct focal spot behind the lens unit for the Raspberry Pi camera, he covered the camera module with insulation tape and then just glued it to the old camera mount. After hooking it up to an HDMI monitor, the results are quite nice and he reckons he can easily work with components down to 0402 in size.

He’s got a couple of more upgrades in mind to make the system even better. He plans to replace the existing compact fluorescent lamps with a string of LED’s which will provide more uniform illumination. Plus, he can control their brightness, and selectively turn them on or off to get the optimum lighting. The other interesting upgrade would be to add stepper motors to the X-Y translation stage and automate their movement. After looking up a board file and its BoM, he may even be able to search for a part designator and move the stage to bring the part into focus.