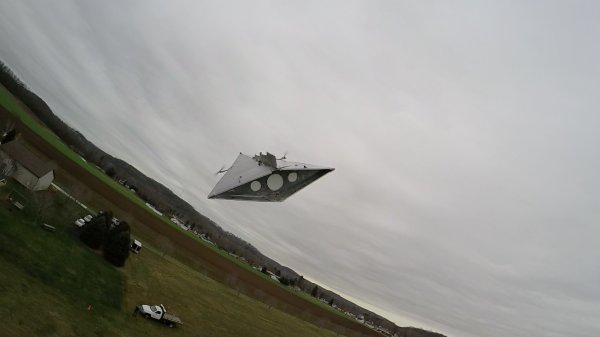 While some of you may have been to see the new Star Wars movie, you might be sad that everything happened a long time ago in a galaxy far away. But there’s a group of RC enthusiasts called [Flite Test] who are trying to bring at least a little bit of that fantasy into real life. They’ve created a truck-sized Star Destroyer that actually flies. It looks kind of terrifying, too.

While it’s not as big as a “real” Star Destroyer, it’s certainly one of the biggest we’ve ever seen in real life. Built out of foam, this monstrosity is 15 feet long and powered by two huge electric motors and a large lithium polymer battery. Of course they didn’t start out by building this huge flying spaceship; they created a smaller model as proof-of-concept and flew that one around for a while to make sure everything was shipshape. While it’s exciting to see the small model in flight, it’s another thing to see the 15-foot version swooping around.

We’re sad to report that the Star Destroyer did meet a similar fate as the one that Rey was scavenging at the beginning of the movie (spoilers: it crashed), we hope that the RC team rebuilds it so it’s space worthy again. Maybe they can even add a real-life ion drive or a few lasers to make it even more real.