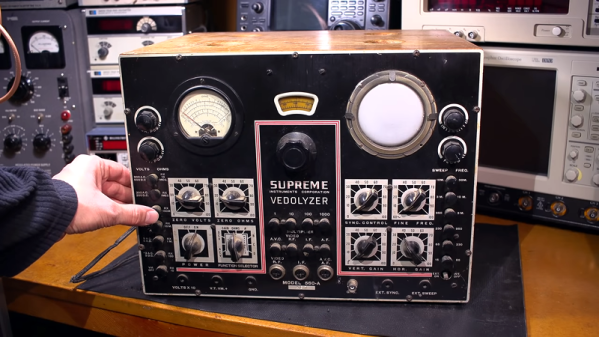 There’s an old joke that all you need to fix TVs is a cheater, a heater, and a meter. If you don’t remember, a cheater was a cord to override the interlock on TVs so you could turn them on with the back removed. Of course, in real life, pro repair techs always had better equipment. In 1939 that might have meant the Supreme Vedolyzer which combined a meter, a ‘scope, and a wavemeter all in one device. [Mr Carlson] acquired one that was in fair shape and made a few videos (see below) of the teardown and restoration.

[Mr Carlson] wasn’t restoring this as an art project, by the way. He plans on using it, so he was less concerned with authenticity and more worried about usability. That led him to do things like remove the input jacks and replace them with BNCs. The video series is a bit of a time investment. Part one is about 82 minutes long! But if you are interested in old gear, this is a chance to peer inside an unusual specimen.