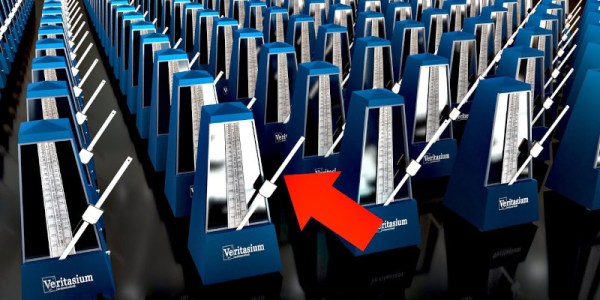 END_OF_DOCUMENT_TOKEN_TO_BE_REPLACED

There are probably times in every Hackaday reader’s life at which you see something and realise that the technology behind it is something you have always taken for granted but have never considered quite how it works. Where this is being written there was such a moment at the weekend, an acquaintance on an amateur radio field day posted a picture of three portable gas-powered alternators connected together and running in synchronization. In this case the alternators in question were fancy new ones with automatic electronic synchronization built-in, but it left the question: how do they do that? How do they connect a new power station to the grid, and bring it into synchronization with the line? There followed a casual web search, which in turn led to the video below the break of a bench-top demonstration.

If two AC sources are to be connected together to form a grid, they must match each other exactly in frequency, phase, and voltage. To not do so would be to risk excessive currents between the sources, which could damage them and the grid infrastructure. The video below from [BTCInstrumentation] demonstrates in the simplest form how the frequencies of two alternators can be matched, by measuring the frequency difference between them and adjusting their speed and thus frequency until they can be connected. In the video he uses neon bulbs which flash at the difference frequency between the two alternators, and demonstrates adjusting the speed of one until the bulbs are extinguished. The two alternators can then be connected, and will then act together to keep themselves in synchronization. There are further videos in which he shows us the same process using a strobe light, then demonstrates the alternators keeping themselves synchronized, and phase deviation between them.

Of course, utility employees probably do not spend their time gazing at flashing neon bulbs to sync their power stations. The same measurements are not performed by eye but by electromechanical or electronic systems with automatic control of the contactors, just as they are in the fancy electronic alternator mentioned earlier. But most of us have probably never had to think about synchronizing a set of alternators, so to see it demonstrated in such a simple manner should fill a knowledge gap even if it’s one only of idle curiosity.