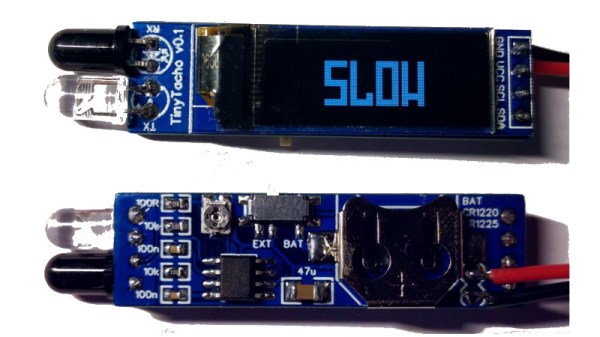 An electronic tachometer is a straightforward enough device, in which the light reflections from a white spot on a rotating object are detected and counted over time, measuring the revolutions per minute (RPM). It’s a technique that has its roots in analogue electronics where the resulting pulses would have fed a charge pump, and it’s a task well suited to a microcontroller that simply counts them. But do you need an all-singing, all-dancing chip to do the job? [Stefan Wagner] has done it with a humble ATtiny13.

His TinyTacho is a small PCB with an IR LED and photodiode on one end, a small OLED display on its front, and a coin cell holder on its rear. The electronics may be extremely simple, but there’s still quite some effort to get it within the ATtiny’s meagre resources. Counting the revolutions is easy enough, but the chip has no I2C interface of its own and some bitbanging code is required. You can find all the design files and software you need in a GitHub repository, and he’s put up a video of the device in action that you can see below the break.

Tachometers are a popular project hereabouts, and we’ve featured a lot of them over the years. Perhaps the best place to direct readers then is not to another project, but to how to use a tachometer.

END_OF_DOCUMENT_TOKEN_TO_BE_REPLACED

If you are a lover of motorcycling, you’ll probably fit into one or other of the distinct groups of riders. Maybe you’re a sportsbike lover always trying to get your knee down, a supermotard who gets their knee down without trying, a trailie rider for whom tarmac is an annoyance between real rides, or a classic bike enthusiast who spends more time in the workshop than riding.

[Xavier Morales] is none of these, for he cruises the roads of his native Catalonia on a Harley-Davidson Sportster. If you’re familiar with Harleys only from popular culture, or you’re a sportsbike rider who derides them for anachronistic handling and brakes, it’s worth taking a look at a modern Harley from a technical standpoint. Despite styling and brand ethos that evokes another era with the trademark large V-twin engine that looks to the untrained eye the same as it did decades ago, today’s Harley is a very modern machine, and much more capable than the sneering sportsbiker would give it credit for.

There is one area though in which [Xavier]’s Harley was sorely lacking. Its single instrument was a speedometer, it had no rev counter. You might think this would be less of an issue with the lower-revving Harley engine than it would be with a Japanese sportsbike that exists in a hail of revs, but it was annoying enough to him that he built his own tachometer. His write-up of the project is both lengthy and fascinating, and well worth a read.

The Sportster’s data bus follows an established but obsolete standard, SAE J1850 VPW. Since driver chips for this bus are out of production, he had to create his own using a transistor and a couple of resistors. Once he has the data he feeds it to a PIC 18F2553 which in turn runs a display driver chip controlling a brace of 7-segment LEDs. There are also a set of LEDs to indicate gear changes. The whole is installed in a 3D-printed housing alongside the original speedometer, behind the glass from another dial. As a result it looks as though the bike was always meant to be a two-clock design, with a professional appearance.

If you’d like to see it in action, he’s posted a few videos, and we’ve put one below the break. The beautiful Catalan scenery and the mountain twisties look very inviting.