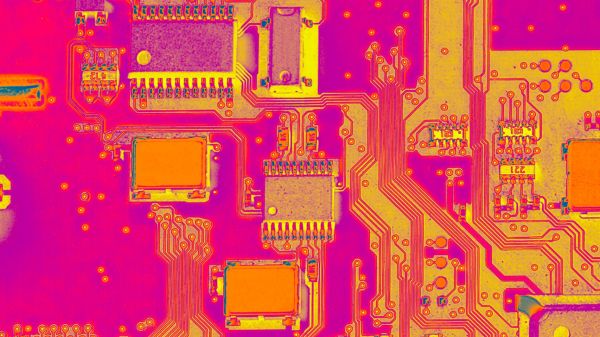 Thanks to the relatively recent rise of affordable board production services, many of the people reading Hackaday are just now learning the ropes of PCB design. For those still producing the FR4 equivalent of “Hello World”, it’s accomplishment enough that all the traces go where they’re supposed to. But eventually your designs will become more ambitious, and with this added complexity will naturally come new design considerations. For example, how do you keep a PCB from cooking itself in high current applications?

It’s this exact question that Mike Jouppi hoped to help answer when he hosted last week’s Hack Chat. It’s a topic he takes very seriously, enough that he actually started a company called Thermal Management LLC dedicated to helping engineers cope with PCB thermal design issues. He also chaired the development of IPC-2152, a standard for properly sizing board traces based on how much current they’ll need to carry. It isn’t the first standard that’s touched on the issue, but it’s certainly the most modern and comprehensive. 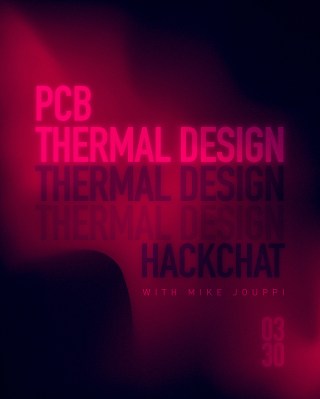 It’s common for many designers, who can be referencing data that in some cases dates back to the 1950s, to simply oversize their traces out of caution. Often this is based on concepts that Mike says his research has found to be inaccurate, such as the assumption that the inner traces of a PCB tend to run hotter than those on the outside. The new standard is designed to help designers avoid these potential pitfalls, though he notes that it’s still an imperfect analog for the real-world; additional data such as mounting configuration needs to be taken into consideration to get a better idea of a board’s thermal properties.

Even with such a complex topic, there’s some tips that are widely applicable enough to keep in mind. Mike says the thermal properties of the substrate are always going to be poor compared to copper, so using internal copper planes can help conduct heat through the board. When dealing with SMD parts that produce a lot of heat, large copper plated vias can be used to create a parallel thermal path.

Towards the end of the Chat, Thomas Shaddack chimes in with an interesting idea: since the resistance of a trace will increase as it gets hotter, could this be used to determine the temperature of internal PCB traces that would otherwise be difficult to measure? Mike says the concept is sound, though if you wanted to get an accurate read, you’d need to know the nominal resistance of the trace to calibrate against. Certainly something to keep in mind for the future, especially if you don’t have a thermal camera that would let you peer into a PCB’s inner layers.

While the Hack Chats are often rather informal, we noticed some fairly pointed questions this time around. Clearly there were folks out there with very specific issues that needed some assistance. It can be difficult to address all the nuances of a complex problem in a public chat, so in a few cases we know Mike directly reached out to attendees so he could talk them through the issues one-on-one.

While we can’t always promise you’ll get that kind of personalized service, we think it’s a testament to the unique networking opportunities available to those who take part in the Hack Chat, and thank Mike for going that extra mile to make sure everyone’s questions were answered to the best of his ability. 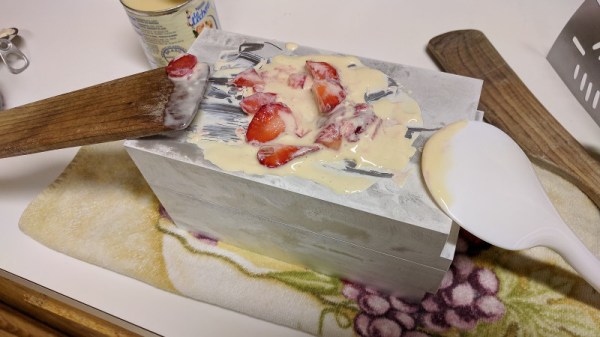 After his last project left him with an eleven-pound block of aluminum, [Jason] got to thinking of what most of us would in that situation: fresh made ice cream. His mind was on the frozen concoctions of the aptly named Cold Stone Creamery, a mall food court staple where a chilled stone is used to turn fresh ingredients into made to order sundaes.

[Jason] did the math and found that an eleven-pound chunk of aluminum can absorb a little over 67,000 joules, which is over twice the energy required to freeze 100 g of water. In place of water he would be using cream, condensed milk, and strawberries, but believed there was a large enough safety factor to account for the differences between his ingredients and pure water.

His first attempt didn’t go exactly as planned, but with his Flir One he was able to back up his theoretical numbers with some real-world data. He found that he needed to start the aluminum block at a lower temperature before adding his ingredients, and through experimentation determined the block only had enough energy to freeze 30 g of liquid.

In the end [Jason] was satisfied with the frozen treat he managed to make from the leftovers of his radial mill project, but theorizes that an ever better solution would be to use a brine solution and drop the aluminum block all together.

Of course, if putting food on a slab of metal from your workshop doesn’t sound too appealing, you could always go the NASA route and freeze dry it. Either method will probably make less of a mess than trying to print objects with it.

If you can’t answer the riddle, don’t feel bad. Metal conductors usually conduct electricity and heat. Usually, that’s true, but researchers at the Department of Energy’s Lawrence Berkeley National Laboratory and at the University of California, Berkeley, have found that vanadium dioxide can conduct electricity without conducting heat.

The Wiedemann-Franz Law states that good conductors of electricity are also good conductors of heat. Vanadium dioxide not only switches from an insulator to a conductor at 67C (152F), but it appears that it also doesn’t conduct as much heat as that law predicts while it is in its electrically conductive phase.