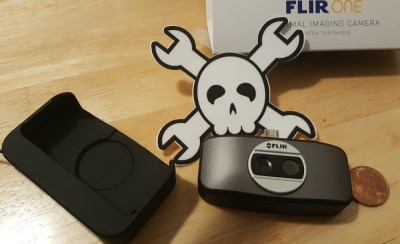 The Flir One’s micro USB connector is extra long, which is perfect for people who keep their phones in a skin case. I had no problem using it with my Note 5 in a case. They also include a couple of self-adhesive rubber spacer pads to ensure a good fit between the module and your phone.

Using the Flir One 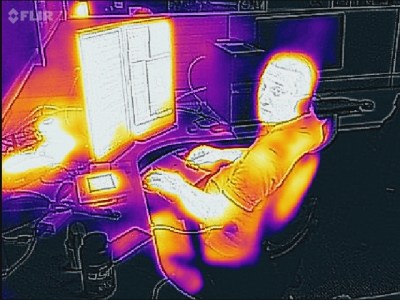 The main software interface for Flir One is Flir’s own app from Google Play. The software will automatically launch when the camera is connected and powered up. Don’t expect high frame rates from this camera. The Lepton runs at 8.9 fps. While you won’t be shooting feature films with it, this is plenty fast enough for thermal analysis. The camera will appear to freeze for a moment every 30 seconds or so. This is caused by the Flir One closing the Lepton’s mechanical shutter and acquiring a dark frame. Much like long exposure photographs taken with a conventional DSLR, this dark frame allows the Flir One to calibrate against a known dark image.

The Flir One can measure temperatures within the range of -4°F to 248°F (-20° to 120°C), so unfortunately you won’t be able to measure your soldering iron temperature with it. Testing against the hot exhaust of my car, the temperature spot display simply displayed “> 248”

Flir includes the ability to snap photos from their software, as well as videos, time lapse videos, and panoramas. Yes, you can even share your thermographs on Twitter and Instagram. Videos use the phone’s microphone to record audio.

Using the Flir One, it quickly becomes apparent that the images look higher than 160×120. This is because the Flir One has two cameras – the Lepton module and a 640 x 480 visible light camera. The Flir One software overlays the two images. They call this Multi Spectral Imaging (MSX). Most of the time, MSX is handy. Sometimes it does get in the way though, especially with macro images. Two cameras will always have some parallax error. When filming objects close to the Flir One, the parallax becomes apparent as the thermograph colors are offset from the visible image outlines. Flir’s solution to this is Macro mode, which allows the user to align the two images with a slider. This can be a bit fiddly, especially when filming closeup objects with unsteady hands. A fixture to hold the phone over the work comes in very handy.

MSX can also be annoying if you just want to view the thermal image. Previous versions of the Flir One software allowed the visible camera to be disabled. Unfortunately, that option is gone. Cutting out the visible light camera can still be done manually with a piece of tape or a finger, but Flir One’s software shows its displeasure by cranking the gain on the visible camera, filling the final image with noise.

Seriously, even with the shortcomings mentioned above, thermal cameras are fun. I’ve had the camera for almost a week now, and the “cool new gadget effect” hasn’t warn off. I still find myself popping it onto the phone to get a thermal view of the world around me. Pointing the Flir One at the walls and ceiling of a room can reveal anything from heating ducts in the walls, to electrical problems, to cool spots created by moisture from hidden leaks. 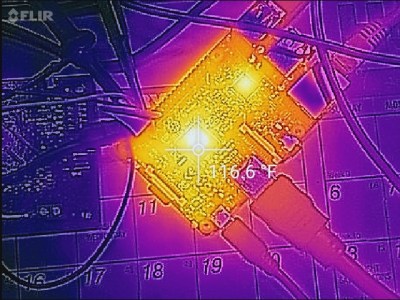 On the electronics side, the Flir One has already been a huge help. I was able to capture images of a Raspberry Pi 3, with its processor running around 116.6 °F (47 °C). Turning the camera on one of my own designs, I found a couple of power supply capacitors running a bit hotter than I’d like.

The Flir even showed me a potential issue with the 60 year old electrical system in my home. Check out this image of my circuit breaker panel. The hotspot on the lower left is the circuit breaker for the electric water heater, which was working hard since someone in the house had just taken a hot shower. The image alarmed me at first, but touching the breaker and the wire itself they barely even seemed warm. It turns out I was seeing an effect of temperature span. 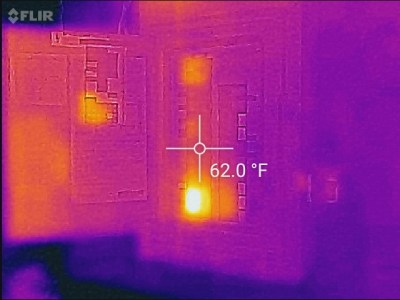 The Flir One software constantly tries to adjust for maximum scene contrast based upon temperature. If the image being viewed only has a couple of degrees span between the hottest and coldest elements, then those items will be colored as such.

The span in that image was two only a couple of degrees, with the breaker being the hottest element of the image. Flir’s software colored things appropriately. Good thing I checked the breaker by touching it before busting out the fire extinguisher!

One word of warning: some people think thermal camera means “Sees through clothing”. Much of this goes back to the Sony Nightshot mods of the late 1990s. Cameras modded with filters were able to image through clothing. The Flir One will see body heat, and it can image through anything that is transparent to infrared, such as plastic shopping bags. While I didn’t run into any cases of see-through clothing, the Flir One will see body heat. Not everyone is comfortable with that, which is something to keep in mind if you bring your thermal camera out and about.

This wouldn’t be a Hackaday review if we didn’t give you some information on hacking with the Flir One. Flir themselves have released an Android SDK on their developer portal. The company also sponsored a number of thermal powered Hackathons in late 2015.

On the internals side, [James Peverill] posted a thorough teardown of the Flir One, showing the Lepton and the Atmel AT91SAM9X25 microcontroller which powers it.

Plugging the Flir One into a PC requires a micro USB female to USB type A male cable. This isn’t exactly a standard cable. After getting my hands on one, I plugged the Flir One into a desktop PC. It enumerates as VID: 09cb, PID: 1996. Of course, Linux didn’t have a driver for it, however the folks over on the EEVblog forum are still working on that.

The Flir One sells for $250 USD. While that is a heck of a lot cheaper that just about any other thermal camera, it’s still a decent chunk of change. Is this a must have tool? No. It’s one of those tools which can be a huge time saver when you need it. I could definitely see a hackerspace buying one for members to use.

Author’s Note: I purchased the Flir One module in this review for my own use. Flir Systems was not involved in the purchasing or the review process.