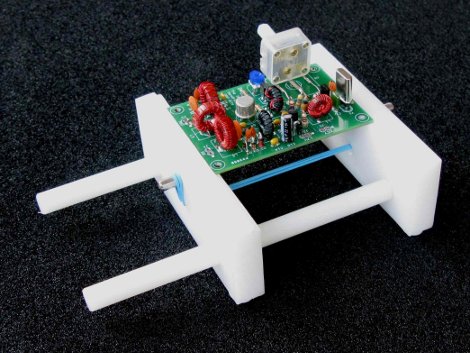 This one almost got relegated to a links post, but [Ken’s] simple PCB vise (PDF) is just so useful we had to give it a standalone feature. It works so well because he made every design feature count.

For instance, the groove the holds the PCB (almost impossible to see here but look at the diagrams in the PDF linked above) is cut with a dovetail bit, rather than just being a square rabbit. The clamping force is provided by that blue rubber band which simply hooks on a metal shelf peg on each side of the clamping plates. Those plates are machined out of polyethylene and slide nicely along the two nylon rods which keep them aligned. There’s really nothing to break or wear out here, except the rubber band with is easily replaceable. The rubber feet keep it from sliding across the bench as you work.

This is great for soldering, and would go right along with those diy smd parts clamps you made. It’s also a great way to hold onto your prototype boards when you’re working out the firmware.