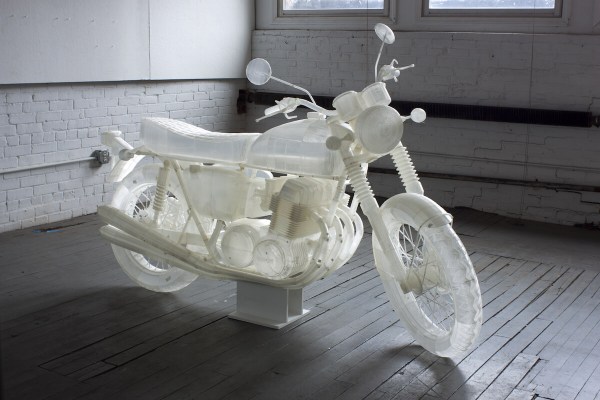 After discovering 3D printing a few years ago, [Jonathan Brand] was hooked. He loved the ability to design things on a computer, and then have them realized as a real 3D object he can touch — sometimes within hours of doing the CAD work. He’s always wanted a motorcycle, but it was never the right time so at long last he decided to print one.

First off — no, it doesn’t actually work — it’s a 1:1 scale model of a 1972 Honda CB500. But it is an amazing testament to 3D printing and prototyping. He’s been working on it for almost as long as he’s had a 3D printer, and while he didn’t quote exactly how long it took to print everything, we’re guessing its in the thousands of hours.

In fact, he printed tons of components, labeled them, and organized them for up to a year before even being able to assemble them together. Talk about project dedication.

He’s even designed loose fits for moving parts — the wheels spin! To give it the cool transparent look, each part is actually almost completely hollow — with thin wall thickness of only about a millimeter. Because of this, the whole bike only weighs 18kg.

For a slightly more functional large-scale 3D print — how about printing your own colorful kayak?

END_OF_DOCUMENT_TOKEN_TO_BE_REPLACED Built inside a 20-foot shipping container placed on its end, the Kamermaker – ” room maker” in Dutch – is one of the largest 3D printers we’ve ever seen. Able to print objects as big as 2 meter square and 3.5 meters high, the Kamermaker is designed to print huge objects including furniture, architectural elements, and even entire rooms.

The Kamermaker is a collaboration between Architectburo DUS and Utilimaker and the result of wanting to build the world’s largest 3D printer pavilion. Built inside a stainless steel-clad shipping container, the Kamermaker features a scaled-up version of the X, Y, and Z axes you’d find in any other 3D printer. The only change is a scaling up of current designs, allowing it to print small wind turbines covering its surface or, theoretically, a life-size TARDIS.

Because using traditional plastic filament would be prohibitively expensive, the Utilimaker team chose to extrude plastic pellets on the fly as it is used. There’s an excellent video of the filament extruder here along with a walk-through of the machine in operation after the break.

END_OF_DOCUMENT_TOKEN_TO_BE_REPLACED

Three days of work in 5 minutes

[Celso] bought himself a Ultimaker kit and put together a time-lapse video of him putting it together. There’s a lot of work that goes into these machines, but being able to print a nearly perfect cube on the first run is nearly magical.

How about a CNC mill, too?

The folks over at Inventables have put together a tiny CNC mill kit designed from the fruitful mind of [Edward Ford]. The Shapeoko mill is designed around the Makerslide linear bearing system, so you’re getting a lot of precision very easily. Here’s some more info on the Shapeoko

Update the firmware on your RasPi

[Hexxeh] has been playing around with the Linux images for his Raspberry Pi, so he needs to reinstall the firmware on an image quite a lot. He wrote a tool to automate this task, but it should be useful for RasPi users that want to keep kernel and firmware up to date. You can get the rpi-updater at [Hexxeh]’s GitHub.

Your robotic barista is still always on the phone

Zipwhip is a company that provides a bridge from your phone to your computer so text messages can be displayed on your desktop. To show off their tech, they created a text enabled espresso machine. Everything on this robotic barista is automatic: the cups are grabbed from a warming tray with a servo arm, coffee is automatically brewed, and the last three digits of your cell phone number are printed on the foam to identify each cuppa. Check out the video; action starts at 1:30.

If you’re looking for something to read on that fancy tablet computer of yours, here’s every issue of New Scientist from 1956 to 1985. The early 60s issues say fusion power plants are about 50 years away, so we should be just fine in a couple of years.

If you’re like us, you’ve been infatuated with the small RC helicopter you picked up on Amazon up until the point where it careened off a wall and broke its blades. Now that you’re wondering about what to do with that small pile of plastic, metal, and electronics, why not print some helicopter blades on your 3D printer?

[Taylor] printed these blades on his Utilimaker, but we don’t see why they couldn’t be printed on a Makerbot or other RepRap. The first set of printed blades worked on the top rotor, but they were too heavy when all four blades were replace. The parts were edited in netfabb using a 0.08mm layer height and now they’re working perfectly. As far as free tools go, Slic3r is the new hotness for .STL to Gcode conversion and now that [Taylor] put the files up on Thingiverse, anyone can print a set of spare blades.

Check out [Taylor] comparing his printed blades to the stock ones that came with his awesome heli after the break.