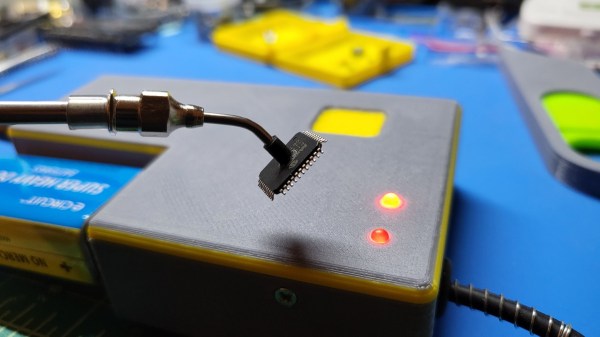 Anyone who’s ever assembled a PCB full of tiny SMD parts will have found that tweezers are not always the best tool when it comes to accurate positioning. Thin, flat components like microcontrollers can be awkward to pick up securely, while small resistors and capacitors have a tendency of snapping out of your tweezers’ grip and flying off into the sunset (or your carpet). Vacuum pickup tools can be a great help, but the most convenient models, with an electric air pump and a foot switch, can be a bit expensive. [sjm4306] shows that it doesn’t have to be that way: he built his “VacPen” mostly from reused components.

At the heart of the project is a little vacuum pump with a pen-like device hooked up to it through a flexible hose. The tip of the pen holds a pickup nozzle that came from a cheap manual pick and place tool. Both the pump and pen were salvaged from some gas analysis instrument that [sjm4306] tore apart a long time ago; the pen is especially convenient since it comes with a built-in brush-like filter that can trap any debris or tiny parts that might be accidentally swallowed.

The VacPen controller is housed inside a neat 3D printed enclosure that holds a custom PCB with an ATtiny microcontroller. The pump can be operated either through a foot switch, or by pressing on the touch-sensitive pad on top of the enclosure. [sjm4306] made this by soldering a wire to a copper penny and sticking it on the inside of the lid: simple, effective and cheap.

As you can see in the video embedded below, the VacPen is perfectly capable of picking up any kind of SMD component, and just as importantly, immediately releasing it at the desired moment. If you’re new to SMD technology, we can recommend this tutorial by [Bil Herd] that covers vacuum tweezers as well. If you’re more into automating vacuum pickup tools, this cool robot might be of your interest.

END_OF_DOCUMENT_TOKEN_TO_BE_REPLACED 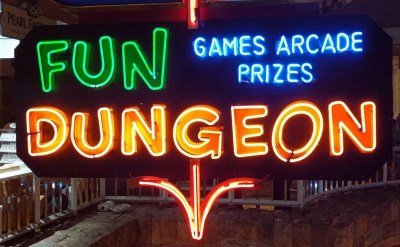