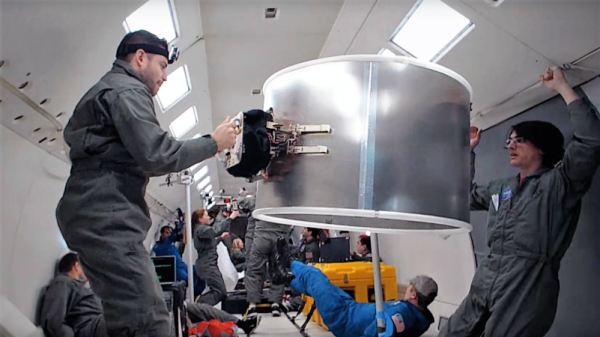 Space is a mess, and the sad truth is, we made it that way. Most satellites that have been lofted into Earth orbit didn’t have a plan for retiring them, and those dead hulks, along with the various bits of jetsam in the form of shrouds, fairings, and at least one astronaut’s glove, are becoming a problem.

A mission intended to clean up space junk would be fantastically expensive, but money isn’t the only problem. It turns out that it’s really hard to grab objects in space unless they were specifically designed to be grabbed. Suction cups won’t work in the vacuum of space, not everything up there is ferromagnetic, and mechanical grippers would have to deal with a huge variety of shapes, sizes, and textures.

But now news comes from Stanford University of a dry adhesive based on the same principle a gecko uses to walk up a wall. Gecko feet have microscopic flaps that stick to surfaces because of Van der Waals forces. [Mark Cutkosky] and his team’s adhesive works similarly, adhering to surfaces only when applied in a certain direction. This is an advantage over traditional pressure-sensitive adhesives; the force needed to apply them would cause the object to float away in space. The Stanford grippers have been tested on the “vomit comet” and aboard the ISS.

We can think of tons of terrestrial applications for this adhesive, including the obvious wall-walking robots. The Stanford team also lists landing pads for drones that would let then perch in odd locations, which we find intriguing.

Need to get up to speed on more mundane adhesive? Check out our guide to sticky stuff for the shop.

END_OF_DOCUMENT_TOKEN_TO_BE_REPLACED

If you need to build a robot to carry something, you need a bit motor, right? Not so with these tiny robots out of Stanford’s Biomimetic Dexterous Manipulation Laboratory. One of these 12g MicroTugs can drag a 600g mug of coffee across a table, or even a 12kg weight. According to the authors, it’s a, ‘capability … comparable to a human dragging a blue whale.’ Square-cube law notwithstanding, of course.

What makes these little robots so strong? It’s not the actuators; it’s their feet. On the bottom of this robot is a material that uses mechanical anisotropic adhesion, a fancy material that only sticks to flat surfaces when it’s being pulled in a specific direction.

The best description of this material inspired by gecko feet would be this video, also from the Stanford BDML lab. It’s a neat material that we’ll probably find in Post-It notes in a decade, and with a single motor, a tiny robot can lift thousands of times its own body weight.

Videos below. Thanks [Adrian] for the tip.