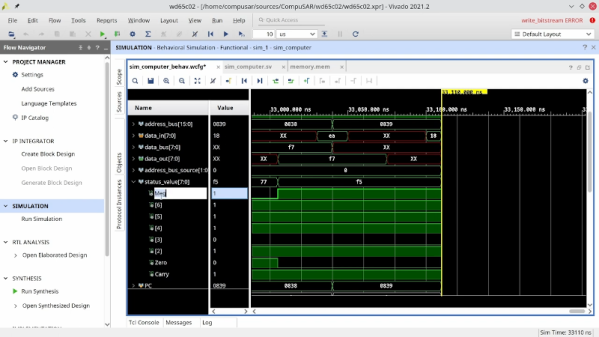 While there has been no shortage of FPGA-based recreations of classic processors, we always enjoy seeing a new approach. Last month [Some Assembly Required] took on the challenge to recreate a classic computer from the ground up and started with a 6502 implementation in Verilog. You can see in the second video below that he’s made good progress and there are apparently more videos to come.

The ROL instruction is the subject of the second video. We liked the approach of looking at what the instruction does and how many cycles it takes on different variants It is always good to make sure you know exactly what you are trying to accomplish before you get started.

END_OF_DOCUMENT_TOKEN_TO_BE_REPLACED

Vivado is Xilinx’s software for configuring the Zynq (among other chips), and the tutorial shows you how to use it. The Ethernet PHY is an FPGA Mezzanine Card (FMC) with four ports that is commercially available. The project uses VHDL, but there is no VHDL coding involved, just the use of canned components.

The real issue when using an FPGA and a CPU is the interface between the processor and the FPGA circuitry. In this case, the ARM standard AXI bus does this task, and the Ethernet component properly interfaces to that bus. The IP application in the second part of the post is an echo server.

We’ve seen the Zynq used in flying machines and also in a music synthesizer. Although this project doesn’t use any Verilog or VHDL that you create, it is still a great example of configuring using Vivado and using common components in a design.