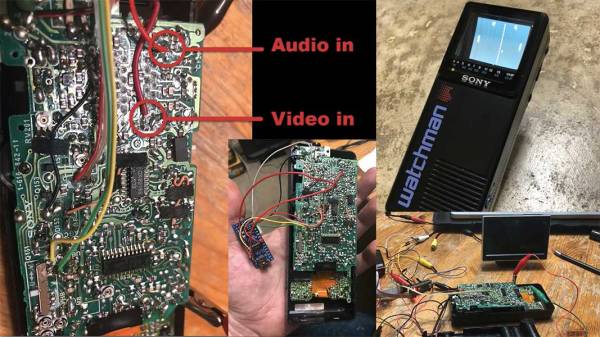 The era of the vintage television was a great one, and one of the transitional by-products was the Sony Watchman. It was a portable TV which Sony started selling in 1982, and the amazing thing about it was that it had an actual 4-inch cathode ray tube or CRT. [Sideburn] just posted a video in which he hijacks the internals of a Watchman to make it into a portable game of Pong.

The hack begins with removing the TV tuner module inside to make some room for the new residents. Next comes the M51364P which is VIF video decoder chip, and for which surprisingly there is not a lot of info on the web. They were able to find a part of the schematic, which though it was in Russian may still be useful for enthusiasts. Removing the VIF revealed the audio and video pins that needed the appropriate signals for the hack to be successful. In an age of multilayer boards it is amazing how a two-layer PCB makes life so easier for the tinkerer.

For the new brains an Arduino Nano clone was selected, and instead of adding modern buttons the existing volume and band select switches were convinced to be the paddle control and play/pause button. Getting everything to fit was easy with the absence of the tuner module, and voila! New(ish) hardware. For the firmware, [Sideburn] turns to Hackvision firmware which has a host of games such as Space Invaders, Asteroids, and even Tetris.

We covered Hackvision a few years ago as a hardware/firmware bundle, and if you are more into CRTs then check out the Arduino driven 6845 CRT controller.

END_OF_DOCUMENT_TOKEN_TO_BE_REPLACED I have been on the hunt in our local thrift and random junk stores lately for a small TV to hopefully modify into a decent enough computer monitor for my Apple //C and Trash80. While there are TONS of TV’s out there, none were really striking me in tube size or picture quality. Roaming around the last resource I happened to find this tiny Sony Watchman Color LCD TV.

Of course this thing is way too tiny for a computer monitor. I thought it would be a great thing to have around the bench for when I am repairing a video game system, or messing about with the TV out Arduino library (the 3 buck price tag on half off day didn’t help either). Directly out of the store this thing is totally useless as there are no inputs and its tuner is for analog “over the air” stations which no longer exist.

Join me after the break to see how I turned this buck fifty paperweight into a functional bench tool!