In the early 90s, the Creative Sound Blaster was the soundcard. It wasn’t the absolute best sounding card on the market, but it quickly became the defacto standard and delivered good sound at the right price. It relied primarily on the Yamaha OPL-3 FM synthesis chip, but if you were feeling spendy, you could pimp it out with a Wave Blaster add-on card, which essentially bolted a sample synthesis engine onto the card. This gave the card a broad palette of sampled instruments with which to play MIDI tunes all the sweeter, so you could impress your grade school chums who came over to play DOOM.

It’s now 2017, if you hadn’t checked the calendar, and Sound Blasters from yesteryear are only going to go further upward in price. It goes without saying that add-on daughterboards and accessories are even rarer and are going to be priced accordingly. So, if you’re building a vintage gaming rig and are desperate for that sample-synth goodness, [Serdashop] are here to help with their latest offering, the Dreamblaster S2.

It’s reportedly the smallest Wave Blaster add-on board available, which is awesome. If you’re sticking it on top of your Sound Blaster 16, yes, it’s pointless – you’re not exactly short on room. But if you want to integrate this with a compact microcontroller project? Size matters. Yes, you can feed this thing MIDI signals and it’ll sing for you. A hot tip for the uninitiated: MIDI speaks serial, just like everything and everyone else. Your grandma learned to speak it in the war, you know.

Your options for hooking this up are either slotting it into a Wave Blaster compatible card, or buying the carrier board that allows you to use it with a Game Port, in addition to custom-wiring it to your own hardware. We’d love to see this as a HAT for the Raspberry Pi Zero. Do it, send it in and we’ll write it up.

END_OF_DOCUMENT_TOKEN_TO_BE_REPLACED 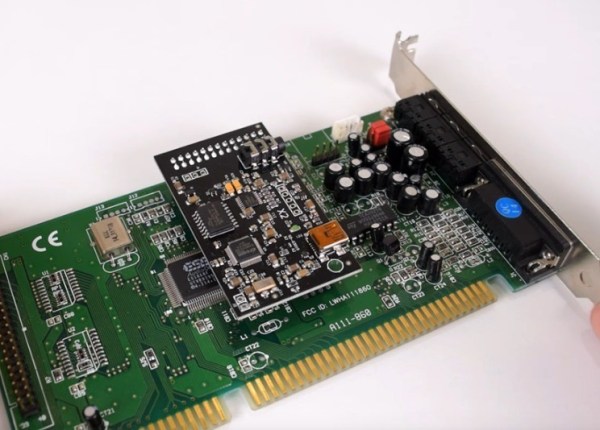