Chess is a slow game of careful decision-making, looking several moves ahead of the current state of the board. So is machining, and combining the two is an excellent way to level up your machine shop chops. And so we have the current project from [John Creasey] who is machining a chess set out of stainless steel.

This isn’t that new-fangled computer numerical control at work, it’s the time-tested art of manual machining. Like chess, you need to plan several steps ahead to ensure you have a way to mount the part for each progressive machining process. In this first video of the series [John] is milling the knights — four of them, with two which will eventually get a black oxide treatment.

Milling the horse head is fun to watch, but you’ll be delighted when the work gets to the base. [John] is using a pipe fitting as a fixture to hold the already-milled horse-head-end while working the base on his lathe. The process begins by getting rid of the inner threads, then working the pipe fitting very carefully to the diameter of the chess piece for a perfect press fit. Neat!

At the end, [John] mentions it took “quite a few months of weekends to get to this point” of having four pieces made. They look great and we can’t wait to see the next piece in the set come to life. You’ll find the video embedded below, but if you can’t sink this kind of time into your own chess set, you may try three-dimensional laser cut acrylic pieces.

END_OF_DOCUMENT_TOKEN_TO_BE_REPLACED

Furbys have been around for a while and they are an interesting (if annoying) toy that will teach the kids to be okay with their eventual robotic overlords. In the meantime, the latest version of the robotic companion/toy/annoyance uses Bluetooth LE to communicate with the owner and [Jeija] has been listening in on the Bluetooth communication, trying to reverse engineer the protocol in order to run code on Furby.

[Jeija] has made a lot of progress and can already control the Furby’s actions, antenna and backlight color, and change the Furby’s emotional state by changing the values of the Furby’s hungriness, tiredness, etc. [Jeija] has created a program that runs on top of Node.js and can communicate with the Furby and change its properties. [Jeija] has also discovered, and can bring up, a secret debug menu that displays in the Furby’s eyes. Yet to be discovered is how to run your own code on the Furby, however, [Jeija] is able to add custom audio to the official DLC files and upload them into the Furby.

[Jeija] points out the all this was done without taking a Furby apart, only by sniffing the Bluetooth communication between the robot and the controlling app (Android/iOS device.) Check out a similar hack on the previous generation of Furbys, as well as a replacement brain for them. We just hope that the designers included a red/green LED so that we will all know when the Furbys switch from good to evil.

END_OF_DOCUMENT_TOKEN_TO_BE_REPLACED 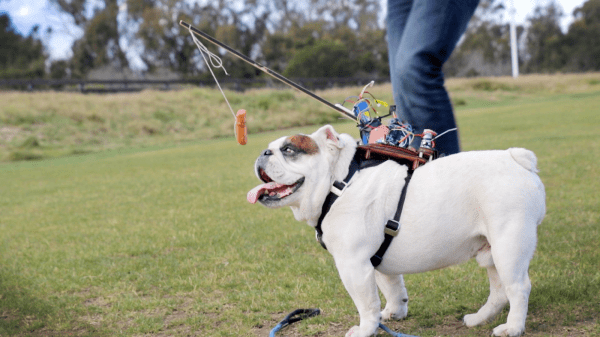 Until the industrial revolution, humans made use of animals to make our labor easier. This is still seen in some niche areas, like how no machine yet has been invented that’s as good at sniffing out truffles as pigs are. [William] has hearkened back to humanity’s earlier roots, but in a more modern twist has made something of a general purpose dog that could feasibly do any work imaginable. Now his dog is remote-controlled.

[William] accomplished the monumental task in a literally cartoonish fashion using the old trope of hanging a hot dog in front of something’s face to get them to chase it. The attachment point was fitted with a remote control receiver and an actuator to get the hanging hot dog to dangle a little bit more to the dog’s right or left, depending on where the “operator” wants the dog to go. [William]’s bulldog seems to be a pretty good sport about everything and isn’t any worse for wear either.

Believe it or not, there has been some actual research done into remote controlling animals, although so far it’s limited to remote-controlled cockroaches. We like the simplicity of the remote-controlled dog, though, but don’t expect to see these rigs replacing leashes anytime soon!

END_OF_DOCUMENT_TOKEN_TO_BE_REPLACED

If you got an old PC/XT stored somewhere in basement and want to use a newer keyboard, here’s a little project you might like. [Matt] built an AT2XT keyboard adapter on a prototype board using an AT to PS/2 keyboard cable. An AT2XT keyboard adapter basically allows users to attach AT keyboards to XT class computers, since the XT port is electronically incompatible with PC/AT keyboard types. For those retro computing fans with a lot of old PCs, this trick will be great to connect the XT machines to a KVM (keyboard/Video/Mouse) switch.

[Matt] found schematics for the project on the Vintage Computer Federation Forum, but used a PIC12F675 instead of the specified PIC12F629. He does provide the .hex file for his version but unfortunately no code. You could just burn the .hex file or head up to the original forum and grab all files to make your own version. The forum has the schematics, bill of materials, PCB board layout and firmware (source code and .hex), so you just need to shop/scavenge for parts and get busy.

And if you are felling really 31337, you can make a PS/2 version of the binary keyboard to justify the use of your new adapter.

Death Stars were destroyed twice in the Star Wars movies and yet one still lives on in this 168 LED persistence of vision globe made by an MEng group at the University of Leeds in the UK. While Death Stars are in high demand, they mounted it on an axis tilted 23.4° (the same as the Earth) so that they can show the Earth overlaid with weather information, the ISS position, or a world clock.

More details are available on their system overview page but briefly: rotating inside and mounted on the axis is a Raspberry Pi sending either video or still images through its HDMI port to a custom made FPGA-based HDMI decoder board.  That board then controls 14 LED driver boards mounted on a well-balanced aluminum ring. All that requires 75W which is passed through a four-phase commutator. Rotation speed is 300 RPM with a frame rate of 10 FPS and as you can see in the videos below, it works quite well.

END_OF_DOCUMENT_TOKEN_TO_BE_REPLACED 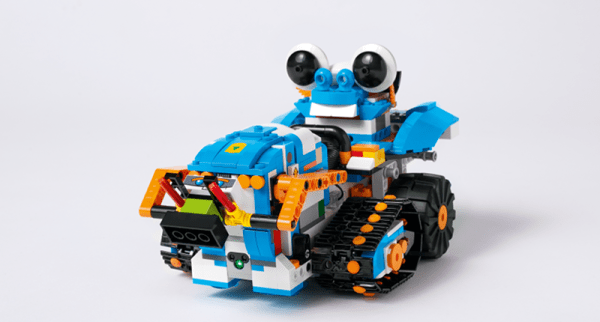 Kids often have their first exposure to robots in school using Lego Mindstorm kits. Now Lego is rolling out Boost — a robotic kit targeting all Lego builders from 7 years old and up. The kit is scheduled to be on the market later this year (it appeared at the recent CES) and will sell for about $160.

[The Brothers Brick] had a chance to try the kit out at CES (see the video below) and you might find their review interesting. The kit provides parts and instructions to build five different models: a cat, a robot, a guitar, a 3D printer, and a tracked vehicle. You can check out the official page, too.

END_OF_DOCUMENT_TOKEN_TO_BE_REPLACED

In the almost five years since the launch of the original Raspberry Pi we have seen a huge array of competitors emerge in the inexpensive single board computer market. Many have created their own form factors, but an increasing number have gone straight for the jugular of the fruity board from Cambridge by copying its form factor and interfaces as closely as possible. We’ve seen sterling efforts from the likes of Banana Pi, Odroid, and several others, but none have yet succeeded in toppling it from its pedestal.

The latest contender in this arena might just make more of an impact though, because it comes from a major manufacturer, a name you will have heard of. Asus have quietly released their Tinker, board that follows the Pi form factor very closely, and packs a 1.8 GHz quad-core ARM Cortex A17 alongside an impressive spec we’ve captured as an image for this article. Though they are reticent about it on their website, there is a SlideShare presentation with some of the details, which we’ve placed below the break.

At £55 (about $68) where this is being written it’s more expensive than the Pi, but Asus go to great lengths to demonstrate that it is significantly faster. We will no doubt verify the accuracy of that claim as the boards find their way into the hands of our community. Still, it features a mostly-Pi-compatible I/O header, and the same display and camera connectors as the Pi. There is no information as to how compatible these last two are though.

Other boards in this arena have boasted impressive hardware, but have fallen down when it comes to the support for their operating systems. When you buy a Raspberry Pi it is not just the hardware you are taking on but the Raspbian operating system and its impressive community support. The Tinker supports Debian, so if Asus is to make a mark they must ensure that its support rivals that of the board it is targeting. If they succeed in that endeavor then the result can only be good news for us.