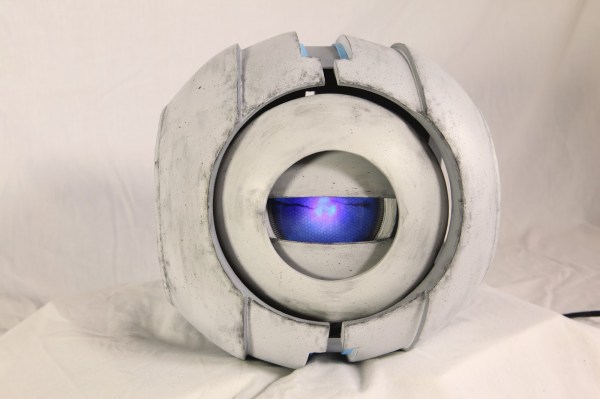 It’s been over 4 years since Portal 2 launched, but Wheatley, the AI character with a British accent, remains a captivating character. [Evie Bee] built a Wheatley replica complete with sound, movement, and one glowing eye.

The body of Wheatley is made out of blue insulation foam, also called XPS foam, laminated together with UHU Polyurethane glue. This formed a sphere, which was then cut into a detailed body. Papier mache clay was used to strengthen the thin foam.

The electronics for this build provide light, motion, and sound. The eye is moved by a total of 3 Arduino controlled servos: two for the movement of the eye, and one to allow it to open and close. Movement is controlled by two joysticks. Sound is provided by the Adafruit Sound Board, which connects to a speaker and a Velleman Sound to Light Kit. This kit controls the LEDs that light the eye, making it react to the voice of Wheatley.

You can watch this Wheatley rant at you after the break. Of course if you’re going to have a Wheatley you need a GLaDOS potato as well.

END_OF_DOCUMENT_TOKEN_TO_BE_REPLACED This incredibly detailed puppet of the Wheatley from Portal was sent into us, and we a so very happy that we’re not writing about a GLaDOS build right now.

Hewn from florist foam and covered Wonderflex and Apoxie Sculpt, Wheatley pretty much tows the line as far as cosplay and prop builds go. What makes Wheatley interesting is his movement mechanism – he’s actually a hand-controlled puppet. Portal quotes come a small sound module that plays 10 Wheatley quotes. The control system has ten buttons and allows for the display of a lot more emotion than we would expect from a talking sphere. We really like the completely manual solution to an articulated robot eyeball – a really great, simple solution to a complex problem.

Like the portal turret and the adorable and friendly companion cube, we’re really impressed with the build quality of Wheatley. Yet again we’re left wondering why Valve doesn’t license some awesome toys like their office sentry.

Check out the intelligence dampening sphere in action after the break.