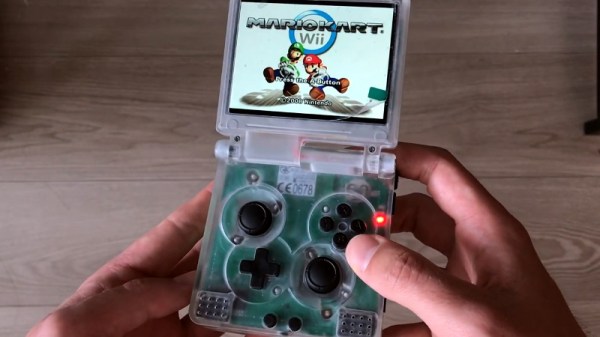 Over the last few years we’ve seen several projects that convert Nintendo’s Wii into a handheld console by way of a “trimming”, wherein the system’s motherboard is literally cut down to a fraction of its original size. This is made possible due to the fact that the majority of the console’s critical components were physically arranged in a tight grouping on the PCB. While it might not be the smallest one we’ve ever seen, the Wii SPii by [StonedEdge] is certainly in the running for the most technically impressive.

It took [StonedEdge] the better part of a year to go from the first early 3D printed case concepts to the fully functional device, but we’d say it was certainly time well spent. The general look of the portable is strongly inspired by Nintendo’s own GameBoy Advance SP, albeit with additional buttons and control sticks. In terms of software, the system is not only able to run Wii and Gamecube game ISOs stored on its SD card, but also several decades worth of classic titles through the various console emulators available for the system. 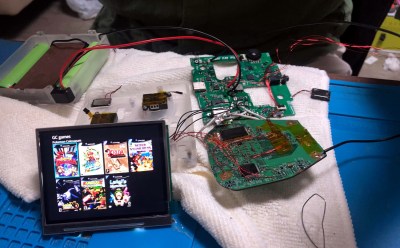 The Wii SPii makes use of a particularly difficult variation of the Wii miniaturization concept known as the OMEGA trim, and is supported by a custom PCB that’s responsible for things like power management and audio output. As it was never designed to be particularly energy efficient, the trimmed Wii motherboard will deplete the system’s dual 18650 cells in about two and a half hours, but at least you’ll be able to get charged back up quickly thanks to USB-C PD support. All of the hardware just fits inside the custom designed case, which was CNC milled from acrylic and then sandblasted to achieve that gorgeous frosted look.

[StonedEdge] says the Wii SPii was inspired by the work of accomplished smallerizer [GMan], and even uses some of the open source code he developed for the audio and power management systems. In fact, given its lengthy list of acknowledgements, this project could even be considered something of a community affair. Just a few years after we marveled at a functional Wii being crammed into an Altoids tin, it’s truly inspiring to see what this dedicated group of console modders has been able to accomplish by working together.

END_OF_DOCUMENT_TOKEN_TO_BE_REPLACED 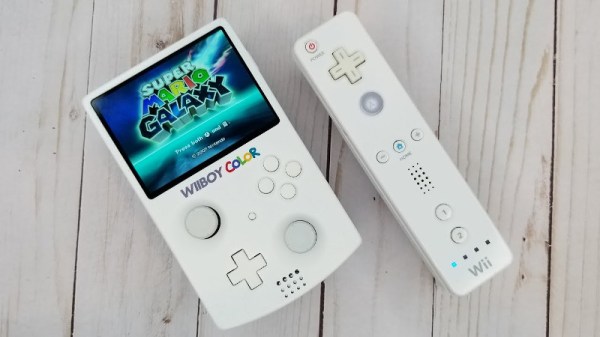 Anyone can go out and buy a handheld console, and if you want to be the cool kid on the school bus, you can always ask your parents to take you out to get one. But if you want real street cred that lasts through your adult years, you’ve gotta put something together yourself. [GingerOfMods] has done just that with the Wiiboy Color.

Yes, it’s another home-console-turned-portable, and it’s perfomed with exquisite execution. The Wii motherboard is cut and sliced to the absolute bare minimum, as the aim was to build the entire system to the rough form factor of the original Game Boy Color. Custom PCBs were then used to link the chopped ‘board to peripherals, such as the USB drive used to load games and the circuitry from a Gamecube controller. The screen is a beautiful looking 3.5″ IPS LCD, running at 480p and originally intended for use as an automotive backup camera. Battery life is around 2-3 hours, with a USB-C port included for easy charging. More details are included on the forum build log.

It’s a tidy build, and the 3D printed case, Switch joysticks and DS Lite buttons give it a near-production quality finish. [GingerOfMods] intends to build more for commissions, though expect a hefty price tag given the labor and custom work involved. We’ve seen other portable Wiis before too, like this tightly-packed Kapton-heavy build. Video after the break.