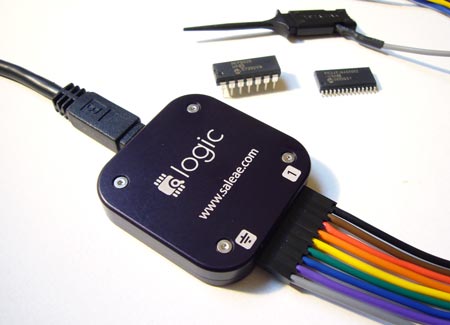 A logic analyzer records bus communications between two chips. If you’ve ever had a problem getting two chips to talk, or wanted to reverse engineer a protocol, a logic analyzer is the tool you need to spy on the bus.

The Logic is a USB logic analyzer with eight channels and sampling rates up to 24MHz. Among hobby-level logic analyzers, the Logic has a good mix of features and decent sampling rates. We’ve been following Joe Garrison’s work on the Logic for a long time. If you’ve ever considered bringing a product to market, you can learn a lot from Joe’s blog that documents his development process.

When it debuted, the Logic was so popular that it was hard to buy one. It’s now widely available, and Saleae gave us one to try. Read our review below.

END_OF_DOCUMENT_TOKEN_TO_BE_REPLACED

According to the author, the HP 50G is an awesome calculator. But as awesome as it is, it is powered off of not-so-awesome AAA batteries. These little batteries don’t last long under the load of the calculators awesomeness, so a mod needed to be done. The battery chosen for installation was a replacement battery for a Sony PSP. He was able to find one, including the external charge regulator board for $10.  Dropping it into the case and wiring it to charge off of the existing mini USB port looks fairly simple, very few actual modifications are necessary to the body. Unfortunately, they did end up with an LED protruding from the bottom that makes it wobble a bit, but they’re guessing that they get about 2x the battery life now.

[Contraptionmaker] ran into a problem when putting plastic insulation over his windows during the winter. When you cover the windows from the inside to prevent drafts, your access to the stick that opens the blinds is cut off. His solution was to build an automatic blind opener from a cordless drill. He started with some motors he had around the house, but none of them were strong enough. The final solution was a $10 Black & Decker drill. After removing the handle and trigger to extend it, he made a simple wall mount for it. You may notice him soldering some batteries into it, in his directions. Those are just for backup, in case the power goes out. You can see a video of it in action after the break. If you want something triggered by an alarm, or for a different type of blind, we may be able to help you out.