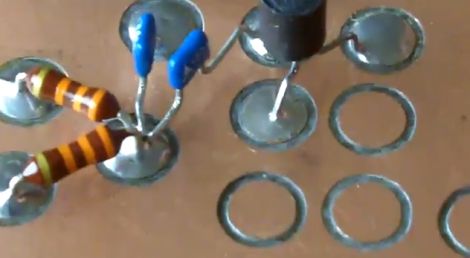 If you’re looking to build some small radio circuits, or if you are simply seeking a new look for your PCBs, you might want to check out what YouTube user [AndyDaviesByTheSea] has been working on lately. He has been building RF circuits as of late and was searching for a better way to create islands or “lands” on copper-clad PCBs.

He says that these sorts of islands are traditionally cut into the PCB with a scalpel or file – hardly an efficient process. [Andy] did a little experimenting and found a great way to quickly and precisely cut lands with a drill. Borrowing a bit of metal from an old VHS tape, he crafted a circular land cutter with a metal file. When mounted as a drill bit, his cutter produces clean, shallow cuts which create perfect lands on which to solder his components.

The only drawback to this method is that [Andy] found his bits were being dulled by the fiberglass boards pretty quickly. His solution was to carefully grind a broken heavy duty drill bit to do the task, which he says works even better than his original cutter.

Hey, it’s the 43rd anniversary of men first walking on the moon. Here’s some stuff we found to celebrate that. Fun trivia: for Apollo 11, [Neil] and [Buzz] didn’t go more than 200 feet from the LEM.

This is so incredibly sad

Remember Heathkit? A lot of cool kit-based electronics came from them. They’re out of business, but you can get all the Heathkit swag you can imagine from the repo man. A ton of stuff from the old Heathkit headquarters is being auctioned off in Byron Center, Michigan this Tuesday, July 24. Notable lots include a HE-Robot and a nice pair of o’scopes. If someone wants to pick up one of the catalog lots for us, we’d be thankful.

Troll Physics: ‘What is with this guy’ edition

We’ve seen [Fredzislaw]’s LED trickery before. The first time was a crazy 3 LED circuit, the reveal of which showed two AC power supplies in a battery connector. This time, [Fred] has two switches and an LED. Turn one switch on, the LED lights up. Turn that switch off and flip the other one, the LED still lights up. Turn both switches on, the LED goes off. Your guess is as good as ours.

Prototyping with a key fob remote

[Gary] wrote in to tell us about the dev board he’s been working on. It has either a PIC or AVR on the back side, broken out into 0.1 inch headers on the front. There’s a small solderless breadboard and an on-board RF link that uses a five-button key fob remote. Seems very useful, no matter what side of the PIC/AVR holy war you’re on.

Over on the RTLSDR subreddit, [photoscotty] bought this TV tuner dongle from Deal Extreme and received the inferior EZTV645 tuner. Unsurprisingly, Chinese manufacturers will just grab whatever is available, put it in an envelope, and ship it off on a slow boat from China. [photoscotty] is trying to return his dongle to DX, but until Sparkfun or Adafruit start selling these things (yes, there’s a market now get on it) you’ll have to be careful out there.

Wouldn’t this feel terrible against your skin all day?

[Colin] printed a watch band on his Makerbot. Apparently Shenzhen humidity didn’t play nicely with his nylon strap, so [Colin] made his own out of plastic. It’s flexible and has a neat looking clasp, as well as an awesome demo for what a 3D printer can actually do. Thingiverse files here.

Recently, [Alan] broke out the ‘ol Atari 2600 to relive his childhood with a bit of Yar’s Revenge and Adventure, but after looking at his new TI EZ430 Chronos watch, he figured he could add a bit of motion control from this classic game system. He used the accelerometer in this watch to play Ms. Pacman by tilting his wrist, an awesome build that really shows off the power of his new wrist worn device.

The watch is running stock firmware and communicates to a PC via an RF module attached to his computer’s USB port. The accelerometer data is fed into a VB.net app to convert the movements of the wrist into up, down, left, and right commands. These commands are then sent out over a serial port to an Arduino to translate those commands into something the Atari joystick port can understand.

Sure, it may be a roundabout way of playing Ms. Pacman, but considering the TI Chronos has been used for very serious work such as stopping SIDS and helping out soccer referees, we’re happy to see a more frivolous application for this neat watch.

You can check out [Alan]’s video after the break, or get the VB and Arduino source here and here.