[Ray] is in a bit of a pickle. All appeared well when he began selling an ESP8266-based product, but shortly thereafter some of them got hot and let the smoke out. Not to worry, he recommends ignoring the problem since once the faulty components have vaporized the device will be fine.

The symptom lies in the onboard red power indicator LED smoking. (Probably) nothing is wrong with the LED, because upon testing the batch he discovered its current limiting resistor is sometimes a little bit low to spec. Off by a hair of, oh, call it an even 1000x. 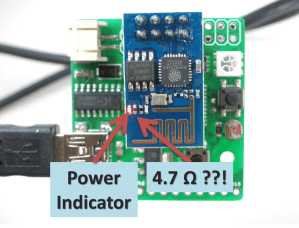 Yep, the 4700 ohm resistor is sometimes replaced with a 4.7 ohm. Right across the power rail. That poor little LED is trying to dissipate half a watt on a pinhead. Like a sparrow trying to slow a sledgehammer, it does not end well. Try not to be too critical, pick ‘n place machines have rough days now and then too and everyone knows those reels look practically the same!

The good news is that the LED and resistor begin a thermal race and whoever wins escapes in the breeze. Soon as the connection cuts the heat issue disappears and power draw drops back to normal. Everything is fine unless you needed that indicator light. Behold – there are not many repairs you can make with zero tools, zero effort, and only a few seconds of your time.

[Ray] also recommends measuring and desoldering the resistor or LED if you are one of the unlucky few, or, if worst comes to worst, he has of course offered to replace the product too. He did his best to buy from authentic vendors and apologizes to the few customers affected. As far as he knows no one else has had this problem yet so he wanted to share it with the community here on Hackaday as soon as possible. Keep an eye out.

If you have never seen  ISO9001-certified electronics repair before, there is a short video of this particular  upgrade caught live on tape after the break.