The antennas were out this morning at Hamvention, radio waves were in the air.  We bumped into some other Hackaday fans, including [Jenniffer Estrada], who is working on low power radar and software defined radio projects.

Repairing then hacking the radio gear on the USS New Jersey

Members of the Battleship New Jersey Amateur Radio Station restored the communications sections of the USS New Jersey (BB-62) to operational capacity, and put the ship’s radio room on the ham bands.  The group has connected functional equipment to the five original antennas, and made the ship’s radio rooms operational, while remaining as historically correct as possible.  Find out more at www.nj2bb.org

Many of the subsystems beyond just the radio room were repaired by the amateur radio group.

One of the notable hacks to the USS New Jersey radio room by this group was to make the ship’s old digital communication system display PSK31 messages automatically from amateur radio operators from all over the world (see photo above with the green-screened computer terminal displaying PSK31 messages).

Not well-known outside of the Amateur radio community, hams have been building and putting satellites into orbit since the 1970’s.  They act like repeaters in orbit, allowing any two stations in their footprint at the same time to talk?  CubeSats are the latest innovation, putting full features into tiny packages.

The military packset/green radio group is one of the fastest growing subcultures of the hobby.  Normally, toting around tens of pounds of (sort of) obsolete gear on ones back is considered military labor, but hams enjoy a good challenge.  Operating in field conditions, sometimes with just a few watts of power forces us to focus on the craft of radio, rather than increasingly feature-rich appliances.

This radio is the predecessor to the BC611, the first true handheld two-way radio.

The Hamvention sponsors short, 1-2 hours seminars on topics of interest to the amateur community.  This year, topics range from getting started working satellites, to digital modes of operations, antennacraft, emergency communications, and antennas you can bring with you when you take your radio camping.  The show featured a live talk and Q&A with astronaut [Michael “Mike” Fincke].

The PCB layout of the $25 network analyzer, stay tuned for more information on this in the next 6 months or so.

While attending the “HF Antenna Construction” seminar we learned about a new low-cost ($25 is the goal) network analyzer that had been created and tested as a prototype, where a Wheatstone bridge and a simple digital signal source were used for the measurement.  This device would be for amateur use, where dynamic range is not too critical.

The ARRL education and technology program is open to high school teachers to learn how to show students how wireless technology works in very practical scenarios.  In this example, students and teachers built a marine research buoy using amateur radio to communicate environmental data over long distances data back to land.

The national Voice of America museum was on site showing their latest interactive demonstrations of electromagnetics and electricity in action.  Below are a number of Faraday motors and an interactive hand-generator game, just two examples of the science exhibits at the Voice of America broadcasting museum.

Antennas? Check.  Kilts?  Check.  Antennas by Radiowavz (www.radiowavz.com) and their colorful retail staff. One of the authors [Scott, KC8KBK] uses one of their products in his home and has talked to stations from South America, to Eastern Europe. 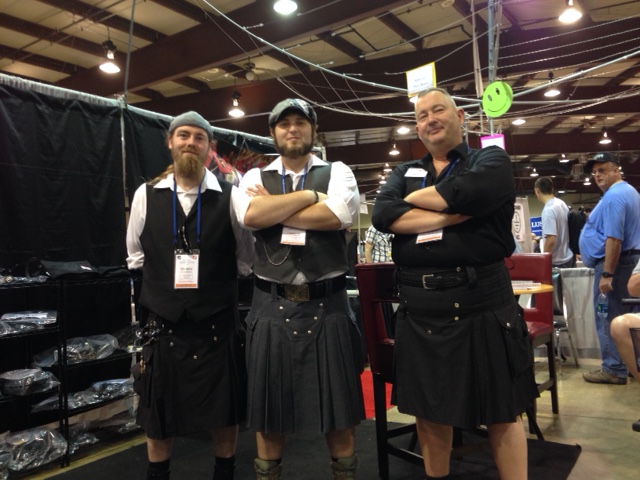 New test gear for all

Not only is the Hamvention a venue to show the latest radio and antenna gear, it is also the place to find the very latest test equipment including.  Seeed was showing their new line of small low-cost spectrum analyzers and signal generators along with other larger companies such as Rigol and many more.

Last day of Hamvention is tomorrow

It’s now or never for vendors to sell that last boat anchor and for attendees to find that piece of gear they can not live without.  Many deals and interesting stories to be had tomorrow for those willing to negotiate, dig around, and haul heavy things back to their cars.

6 thoughts on “The Biggest Day At Hamvention”