A few months ago, [Adam] was building a controller system for a small hydroponic system he had set up in his basement. Since then, the Hackaday Prize was announced, and given the theme – saving the world one plant at a time – he’s renvisioning his garden control and monitoring system as a Hackaday Prize entry.

While the mechanical and green part of the build is exactly what you would expect from something designed from hardware store parts, the electronics are rather interesting. All the plants in either a hydroponic or dirt-based setup will have their moisture level and PH monitored by a a set of electronics that push data up to the cloud.

The current hardware setup includes a DyIO, a very cool dev platform with 24 digital I/Os and 24 servo outputs, a Raspberry Pi, and a few module boards loaded up with ARM microcontrollers and an ESP8266. [Adam] is hitting all the hardware on this build.

So far, [Adam] has a few boards sent out to a board fab, including an analog sensor module, a digital sensor module. a WiFi module hub, and a few bits and bobs that make integration into an existing garden or hydroponic setup easier. It’s a great project for this year’s Hackaday Prize, and proof that you don’t need to come up with a new build to submit something. 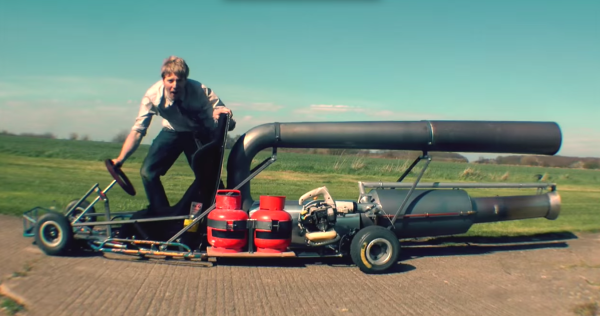 [Colin Furze] is at it again. This time he’s built a freaking jet-engine powered go kart.

In case you’re not familiar with [Mr. Furze], he’s no stranger to building high-speed vehicles, like the fastest baby stroller in the world. And he’s also got a bit of an obsession with pulse jet engines. He’s even made one out of a toilet roll holder. He was a plumber — but now he’s one of the best mad scientist YouTube creators around. We just hope he doesn’t kick the bucket too soon with one of his extreme projects, because his safety tie probably won’t save him!

This month’s project is no exception — he’s strapping his giant pulse jet engine he used to fart on France onto the frame of a tiny go kart. “As you can see the jet to kart ratio is pretty good”. No kidding — the engine has gotta be 2.5 times as long as the go kart’s frame!

Stick around after the break to see him risk his neck for our own amusement.

END_OF_DOCUMENT_TOKEN_TO_BE_REPLACED

Codebender is a web-based tool that allows you to code and program an Arduino. The Chromebook is a web-based laptop that is popular with a few schools. Now you can uses Codebender on a Chromebook. You might need to update your Chromebook to v42, and there’s a slight bug in the USB programmers, but that should be fixed in a month or so.

Here’s a great way to waste five minutes. It’s called agar.io. It’s a multiplayer online game where you’re a cell, you eat dots that are smaller than you, and bigger cells (other players) can eat you. [Morris] found the missing feature: being able to find the IP of a server so you can play with your friends. This feature is now implemented in a browser script. Here’s the repo.

The FAA currently deciding the fate of unmanned aerial vehicles and systems, and we’re going to live with any screwup they make for the next 50 years. It would be nice if all UAV operators, drone pilots, and everyone involved with flying robots could get together and hash out what the ideal rules would be. That’s happening in late July thanks to the Silicon Valley Chapter of AUVSI (Association for Unmanned Vehicle Systems International).

SOLAR ROADWAYS!! Al Jazeera is reporting a project in the Netherlands that puts solar cells in a road. It’s just a bike path, it’s only 70 meters long, and it can support at least 12 tonnes (in the form of a ‘fire brigade truck’). There’s no plans for the truly dumb solar roadways stuff – heating the roads, or having lanes with LEDs. We’re desperately seeking more information on this one.

Forget the combination to your combo lock? Well if you’ve got a 3D printer, an Arduino, a servo and a stepper motor handy — you can build your own Combo Breaker pretty easily. It’s capable of solving any Master combination lock in 8 tries or less.

The creator [Samy Kamkar] is a privacy and security researcher, who absolutely loves finding holes in security. We actually just heard from him at our very own Hack a Day Prize: Los Angeles event, where he talked about his wireless keyboard sniffer he built into a cellphone charger.

He’s previously shown us how to crack a combo lock in 8 tries or less using an online calculator he made. This project is just an extension of that to automate the whole process.

As always he gives an extremely thorough explanation of the project in his build log video — including designing the 3D printed parts! If you wanna build your own it’ll cost just under $100 and you can grab all the necessary info and source files from his GitHub.

[Thanks for the tip Justin!]

END_OF_DOCUMENT_TOKEN_TO_BE_REPLACED 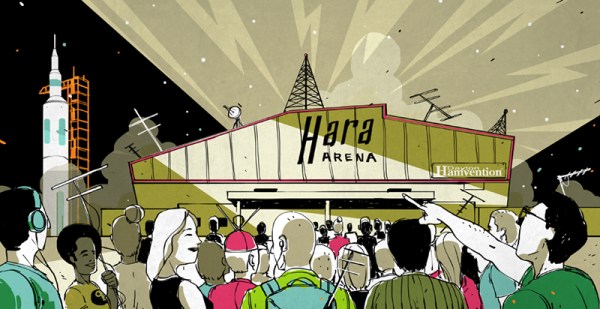 END_OF_DOCUMENT_TOKEN_TO_BE_REPLACED

[Samimy] raided his parts bin to build this articulated lamp (YouTube link) for his computer workstation. Two pieces of aluminum angle form the main body of the lamp. Several brackets are used to form two hinges which allow the lamp to be positioned above [Samimy’s] monitor. The light in this case comes from a pair of 4 watt LED bulbs.

[Samimy] used double nuts on the moving parts to make sure nothing comes loose. The outer nuts are acorns, which ensure no one will get cut on an exposed bit of threaded rod. [Samimy] wired the two bulbs up in a proper parallel mains circuit. The switch is a simple toggle mounted in a piece of Plexiglass on the end of the lamp.

One thing we would like to see on this build is a ground wire. With all that exposed aluminum and steel, one loose connection or worn bit of insulation could make the entire lamp body live.

END_OF_DOCUMENT_TOKEN_TO_BE_REPLACED

It’s no secret that Maker Faire is highly geared toward the younger crowd. This doen’t mean the Faire is completely devoid of the historic; the Bay Area Maker Faire is right in the heart of the beginnings of the computer industry, and a few of the booths are showing off exactly how far computers have come over the last forty years.

[Vince Briel] of Briel Computers has a booth showing off his wares, mostly modern reimaginings of vintage computers. His table is loaded up with replica 1s, a board that’s much smaller but still completely compatible with the Apple I. The MicroKIM made an appearance, but the crown jewel is [Vince]’s Superboard III, a replica of the Ohio Scientific Superboard II. It’s your basic 6502 computer with 32k of RAM, but unlike just about every other modern retrocomputer out there, [Vince] put the keyboard right on the main board.

The switches are Cherry MX, the keys are from WASDkeyboards. [Vince] is actually getting a lot of interest in making modern ASCII keyboards to replace the old and busted boards that came in the home computers of the 70s and 80s. That might be a project [Vince] will release sometime in the future.

A much, much smaller version of the Altair

The Replica I, fully compatible Apple I replica

[Jef Raskin], the Swift Card, and the Canon Cat

[Steve Jobs] may have been the father of the Macintosh, but he was, by no means, solely responsible for the Mac. It was a team of people, and when you talk about the UI of the Mac, the first name that should come up is [Jef Raskin].

One of [Jef Raskin]’s finest works was the Swyft Card, an add-on to the Apple II that was basically just a ROM card that had an OS and Forth interpreter on it. The distinguishing feature of the Swyft card was the use of ‘leap’ keys, a simple way to change contexts when using the computer. We’ve seen replicas of the Swyft card before, courtesy of [Mike Willegal] at the Vintage Computing Festival East.

[Dwight Elvey] of the vintage-computer.com forum brought a few extra special items related to [Raskin] and the Canon Cat. The first was a Swyft card installed in an Apple IIe. The second was a prototype Swyft computer, with SERIAL NUMBER 1 printed on a Dymo label and fixed to the case.

The ‘woodie’, as [Dwight] calls it, has two 1.44 MB disk drives, of which half of the disk is actually usable. [Dwight] didn’t take the machine apart, but I’m 99% sure the CRT in it is the exact same tube found in early 9″ Macs.

Also in [Dwight]’s display is a production Swyft computer and a Canon Cat, the final iteration of [Jef Raskin]’s idea of what a text-based computer should be.

The vintage-computer booth also had a few interesting retrocomputers including a Commodore 128D, the Apple made, Bell & Howell branded Apple II, and an Amiga 2000. Right next door was the Computer History Museum, who brought a very kid-friendly storage medium display. Showing a 10-year-old an 8″ disk is fun.

Analog computer from the Computer History Museum. It was display Chua’s Circuit.

Leap keys for the Canon Cat

A Collection of [Jef Raskin]’s work