We’ve written about Compressorhead before but we’re writing about them again. Why? Because Compressorhead is the most amazing robot band you’ve ever seen, and because they’ve just opened up a Kickstarter to fund building a lead singer robot and recording an album.

And because they’ve released a bunch of new videos, one of which you’ll find below the break.

Animatronic bands playing to pre-recorded background music are Chuck-E-Cheesy. Compressorhead, in contrast, slays it. We don’t know if it’s the fact that they’re actually playing real instruments “live” or if it’s just that the folks behind the scenes are really brilliant MIDI programmers, but Compressorhead sounds really good. 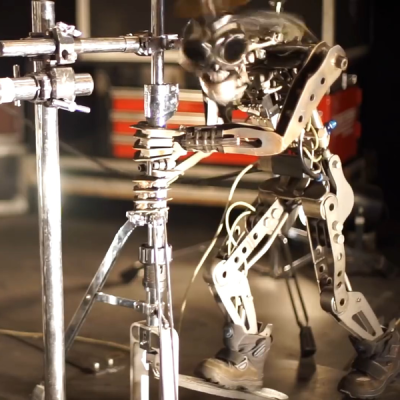 What’s more, they look really good. Dig the mini-me version of the drummer robot that’s headbanging and stomping on the hi-hat pedal with his little robot feet wearing actual boots and a gas mask. His mohawk is made of valve-lifters. No further questions, your honor.

The bass player bot’s bobbing head and the way he leans forward from time to time is uncanny. And the guitarist has a limited variety of moves besides bobbing his head, but makes up for being immobile by having 78 fingers on his fretting hand.

If you can’t get enough Compressorhead, visit their regular website and check out this hour-long concert they played last year in Moscow. By the end, you’ll probably agree that are the most amazing music bots you’ve seen, and that they desperately need a lead singer to tie the whole thing together. We’re hoping that the bot has at least a bit more stage presence than Courtey Love.