There are several key building blocks that combine to make SDR possible. The first is some input device (a source) that is sampled at some sampling rate. For an audio device, the samples will be real numbers. However, radio devices will more likely provide complex numbers with an I and Q component.

If you aren’t familiar with expressing signals as I and Q components (sometimes known as quadrature data), that’s a big topic (with a great 3D explanation, one from Tektronix, and another one from National Instruments). However, you don’t need to directly understand the theory behind quadrature signals to get started with GRC. Just know that the I and Q signals can combine to express any waveform and, conversely, any waveform can break up into a series of I and Q values. With GRC, though, it isn’t that important (in most cases) to understand that, just like you can use a video card without knowing exactly what signals are on the PCI express bus.

You can find a simple starter project on the video below. GRC uses a block diagram (a flow graph) to represent your project. When you create a new flow graph, you’ll see two blocks already present: one for options, and a variable named samp_rate. The most important part of the options block sets the graphical toolkit you want to use (WX graphical widgets or the QT widgets). For our purpose, it doesn’t really matter, but in the video I’m going to select Qt. The sample rate is so integral to your design that there is a special variable for it. Most other blocks will pick up the value of this variable and use it for their sample rate. However, this isn’t always what you want, but it is a good starting point. For this example, I’m eventually going to get input from a sound card, so I wanted a sample rate most sound cards will support (48 kHz). To start with, though, I kept the example very simple as you can see in the diagram above. 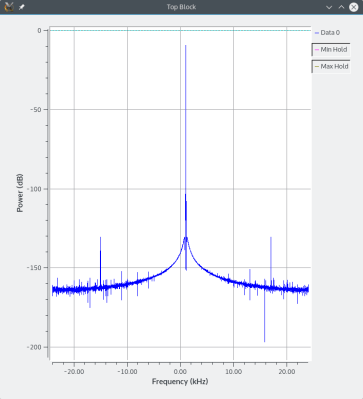 To start with, you’ll place a signal source that generates IQ data (as complex numbers) on the flow graph. The signal generator block can actually generate too much data and slow down the CPU. Since the sample rate is 48 kHz, it doesn’t make sense to generate more than 48,000 samples per seconds. To make sure that happens, you’ll add a throttle block and connect it to the generator.

Connecting ports that have the same color (and, thus, the same data type) is simple. Just click on one port and then click on the other. The order doesn’t matter and you can connect more than one input to a single output. If the port data type doesn’t match, you’ll need to use a type converter (and the example video will show that later).

The final part of my simple example is just an FFT display block that uses QT (the same graphics library you set in the options block). Once it is all connected together you can press the play button and you should see an FFT of the signal. 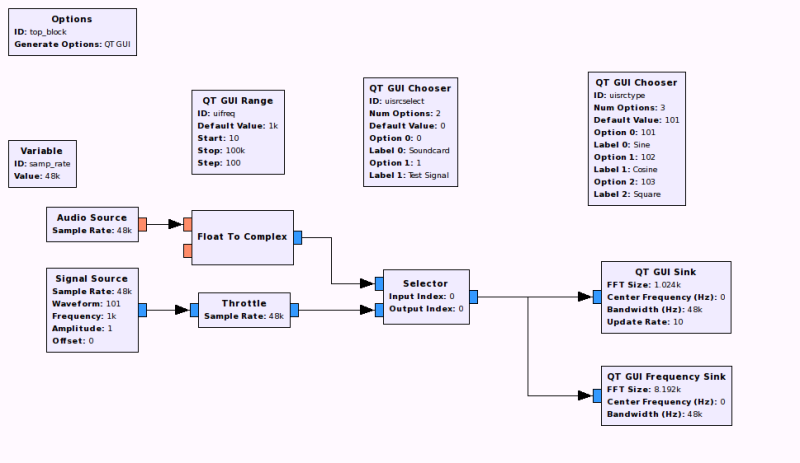 Granted, that isn’t terribly exciting, but you have to walk before you run. In the video you’ll see that you can add other graphical elements like sliders to change the frequency and selectors to pick the type of signal. Finally, you’ll add a sound card input (which does not need a throttle; in fact, in this case it is harmless to have both, but usually you’d remove the throttle block when using a real hardware block). What it does need, however, is a type conversion to change the real data to complex. The final project appears to the left.

I’d encourage you to watch the video with GRC open. You can get most of the way through without any special hardware and the sound card source should work with your sound card (surely you have a sound card in your PC, I’m guessing).

Once you are comfortable with the example, try extending it. Add a sound card sink to get audio out. Try filtering the audio from the test source. For example, what does a low pass filtered square wave sound like at different frequencies? If you are adventurous, try filtering sound card audio and writing it to a wave file for playback. All the tools you need are on the GRC tool palette.

If You Use PulseAudio

By the way, if you use Linux (like I do) and have PulseAudio as your sound system, you may get choppy audio playback. The fix for this is simple. Just create a file in your home directory: ~/.gnuradio/config.conf (or edit it if it is already there). You need the following:

You can increase nperiods even further if that doesn’t make it better.

UPDATE: Continue on to build a radio receiver by example.

Next time I’ll break out the SDRPlay device and build a real radio. If you want a lot of detailed theory, check out [Michael Ossman’s] tutorial series. It is aimed at the HackRF, but the theory still applies. Of course, GNU Radio (and GRC) aren’t the only way to do DSP software, as we’ve noted before.

Read more from this series:
gnu-radio

24 thoughts on “Getting Started With GNU Radio”