New electrical components enable us to reconstruct old wiring more efficiently. Especially, the accessible and cheap FPGA kits which offer the possibility to put together wiring of many old computers as an “on-a-chip” solution.

When I managed to get a hold of an old bubble LED display and a pretty mechanical matrix keyboard, I decided to build a replica of an old single board computer. Logical options seemed to be to build either KIM-1 or Heathkit ET-3400. Replicas of KIM-1 already exist, even for Arduino, so my task would be reduced to connect the keyboard and display. But then I told myself that I would use the fact that my bubble display has 9 positions as an excuse to build the legendary Czechoslovak Single Board Computer PMI-80 which used the same display. My replica is an FPGA, or rather an FPGA emulator of this very computer.

There probably aren’t many people among the readers of Hackaday who would know this computer, which was made in the 80s in the former Czechoslovakia. Hackaday editor [Brian Benchoff] might be the only one reading this that has such a specimen. But if you have one of your own we’d love too hear about it in the comments below. For those not alreay familiar, let’s introduce it first.

PMI-80 is a single board school computer based on an Intel 8080 processor. Since it was created in the eighties behind the so-called Iron Curtain, it used Czechoslovakian Tesla chips instead of original Intel ones, although they were functionally identical, including the numbering (Intel 8080A had a designation MHB8080A, PIO 8255A was sold as MHB8255A etc.)

The computer further included a VQD30 display, manufactured in the former Germany (Deutsche Demokratische Republik). This was a functional equivalent of displays NSA1198 or CQYP95 – 9 seven-segmented common cathode displays. Input data was provided by a keyboard which was built as a 3×9 matrix. Both of these peripherals were driven by a circuit based on the PIO 8255. Port A outlets (PA0-PA6) controlled individual segments (anodes) through the drive transistors. Lowest four bits of port C were decoded by a circuit MH1082 (equivalent to 74145) to code 1-from-9, which was used to select positions, and simultaneously activating the columns of the keyboard. Keyboard lines were connected to bits PC4-PC6.

Programs were stored on tape in a very simple way, which was also controlled via the PIO 8255. Every entry had a start bit (1), then the actual value, and a stop bit (0). During recording a program generated a carrier frequency cycle of 0.2ms on PA6 port and strobbed it with the pin PA7. During reading the information was available at bit PC7.

PIO 8255 was connected as a peripheral at addresses $F8-$FB. The computer board allowed insertion of another PIO circuit, which was then connected to addresses $F4-$F7 and fully available to applications. 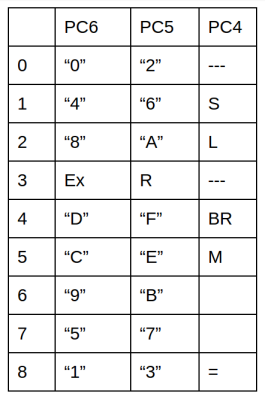 The keyboard was composed of 25 keys arranged in a 5×5 matrix. Inside, however, it was wired differently. Two keys (RE and I) have led directly to the inputs of the processor (RESET, respectively INT). The remaining keys (0-9, A-F, EX, R, BR, M, L, S and =) have been wired in the already mentioned 3×9 matrix as shown here.

M – change / view the memory content. After pressing M the character M appears on the left and computer waits for address entry. Pressing = activates the data entry. Each time you press = the address pointer increases by 1. Data input is finished by pressing keys other than = and 0-F.

R – view and change the contents of registers. After pressing R the character “r” appears on the left and computer waits for a keystroke which corresponds to register pair (AF = A, B = BC, D = DE, HL 9 = 8 = SP). Again, it is possible to modify data and use = move to the next pair.

Ex – runs a program. Computer waits for an address, pressing = jumps into the program. The program can be terminated by jumping to the address 0 or address 8 (corresponds to jump to the monitor).

BR – same as G, but with a breakpoint. First you need to enter an address at which the program should be discontinued, and then the next starting address.

L, S – LOAD and SAVE data (not implemented here)

I – Interruption. Causes interruption and jumps to address $0038. There is only instruction: JMP $1FE6. At this address (in RAM), you must first create a jump into your handler routine.
RE – Reset. During reset the RAM does not clear, so it can be used as a program interruption and return to the monitor.

A Monitor listing with comments is available from the Git repository. 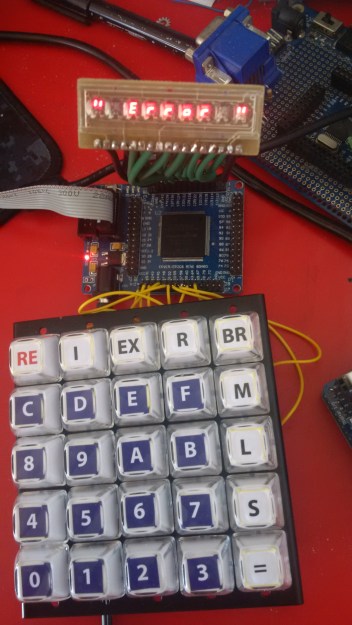 I chose an inexpensive FPGA dev kit, EP2C5/EP2C6 Mini Board, which is the same one Grant Searle used for his Multicomp (Thanks for the inspiration!). It has an Altera Cyclone II chip which I programmed using VHDL.

I connected a keyboard as a 5×5 matrix, not in an original 3×9; recoding into a form suitable for the PMI is being handled inside the FPGA.

The display is connected through resistors straight to the FPGA, and again, all logic and remapping into a form suitable for emulation is being done inside the FPGA.

An interface for working with a tape recorder is missing, I did not implement this yet. You can see my current implementation at my Github repo.

I used a freeware VHDL implementation of the 8080 called Light8080. It is not “T-perfect”, but that was not required anyway. I have also used a pia8255 component.

The archive also includes test components that I used when working on the emulation, eg. a simple display showing hexadecimal numbers. Getting the emulation to work correctly was somewhat precarious. The original implementation of the 8080 processor worked with slightly non-standard timing, therefore strange states appeared on the bus, for example, RAM stopped giving out information before the processor managed to read it, etc. A few things helped me:

Building the hardware and writing the emulator was a weekend of work and it’s still a “version 0.1”. In the future I would like to extend the system to emulate other single-board computers (KIM, ET, perhaps COSMAC ELF) and emulate the tape, perhaps as RS-232 interface. Take a look at the quick video demo. Check out the resources below, and leave a comment if you’re interested in more retro-computing on a chip projects.

10 thoughts on “Retrocomputing On A Chip”