If you are a soldering ninja with a flair for working with tiny parts and modules, check out the Open Source Watch a.k.a. OSWatch built by [Jonathan Cook]. His goals when starting out the project were to make it Arduino compatible, have enough memory for future applications, last a full day on one charge, use BLE as Central or Peripheral and be small in size. With some ingenuity, 3d printing and hacker skills, he was able to accomplish all of that.

OSWatch is still a work in progress and with detailed build instructions available, it is open for others to dig in and create their own versions with modifications – you just need to bring in a lot of patience to the build. The watch is built around a Microdunio Core+ board, an OLED screen, BLE112A module, Vibration motor, a couple of LEDs and Buttons, and a bunch of other parts. Take a look at the schematics here. The watch requires a 3V3, 8MHz version of the Microdunio Core+ (to ensure lower power consumption), and if that isn’t readily available, [Jonathan]  shows how to modify a 5V, 16MHz version. 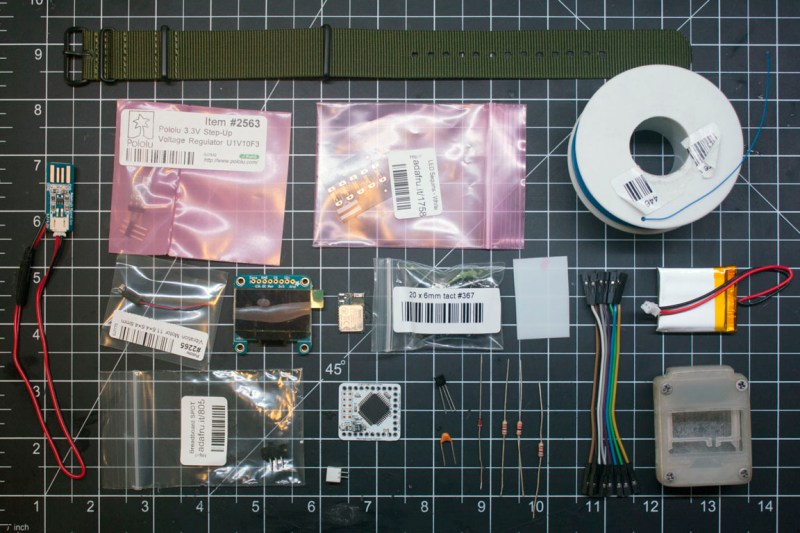 A set of 3D printed parts [ZIP file] houses all of the parts in a neat bundle. A detailed sub-set of instructions by [Jonathan] shows you how to go from the raw 3D printed parts to a slick looking enclosure for the watch. This guide in itself is a great resource that shows a lot of tricks on post-processing 3D printed parts. One trick he shows is how to use a screw heated with a soldering iron to create a counter-sunk recess in the 3D printed plastic. For the Display, he used a mono OLED screen, for its easy availability and low cost. But he lists out a couple of other devices under Display Options, in case you want to use a Sharp Memory Display or a color OLED screen. On his Github repo, you will find the Arduino code as well as a rudimentary iOS app.

When you are done with most of the assembly, you end up with three layers – the ‘back’ containing the battery, charging port, vibration motor and a couple of discrete parts, the ‘middle’ containing the electronic modules, buttons, programming ports and the ‘front’ housing the display and a couple of LEDs. Put it all together and you are ready to strut your OSWatch. What we love about this project is the sheer level of build instructions and details provided by [Jonathan] that lets anyone with the right set of skills replicate his work. And if you would like to look at some more smart watch options, here’s Open Source Smart Watch , the OSHWatch  and the Zerowatch.