If you’re wondering what the difference is between the good ol’ Arduino Uno and one of the new-school Arduinos like the Arduino Due, here’s a very graphic example: [DrNCX] has written a stunning Pacman clone for the Due that seems to play just like the arcade. (Video embedded below the break.) 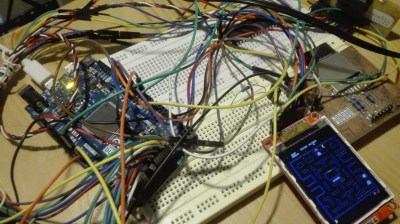 The comparison between the Uno and Due isn’t quite fair. The Due runs on an 84 MHz, 32 bit ARM Cortex-M3 processor. It’s in a different league from the Uno. Still, we view this as an example of the extended possibilities from stepping up into a significantly faster micro. For instance, the video is output to both an ILI9341 TFT screen and external 8-bit VGA at once.

Besides using some very nice (standard) libraries for the parts, it doesn’t look like [DrNCX] had to resort to any particular trickery — just a lot of gamer-logic coding. All the code is up on GitHub for you to check out.

Can the old Arduinos do this? For comparison, the best Pacman we’ve seen on an AVR platform is the ATmega328-based RetroWiz, although it is clocked twice as fast as a stock Uno. And then there’s Hackaday Editor [Mike Szczys]’s 1-Pixel Pacman, but that’s cheating because it uses a Teensy 3.1, which is another fast ARM chip. People always ask where the boundary between an 8-bit and 32-bit project lies. Is a decent Pacman the litmus test?

28 thoughts on “Pacman Proves Due Is More Than Uno”