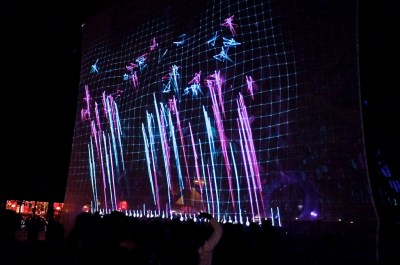 If you haven’t yet heard of PixelPyros you are in for a treat. Giant projected digital fireworks alone are pretty cool, but it’s a lot more fun if the audience is controlling the show. And then it begins to get supercharged when you add an 11-Watt laser to the mix. The laser is much more vivid than the projectors and the combination of the two is much more than the sum of their parts. As the fireworks are playing out, infrared cameras are watching the screen from behind to detect the audience touching the screen. When they hit the screen, fireworks launch in real time thanks to Seb’s software.

At this point he considers himself as addicted to using the high powered laser. His work on the Smashing Conference light show in 2014 is breathtaking. The event was held in  Oxford Town Hall with Seb blending the laser’s intensity to break out of the screen and use the entire space. The VU meter on the organ pipes with particles shooting out the top is magnificent!

All of this is just the preamble to his discussion of the Laser Light Synth project! The finished project is installed in a building featuring massive stone columns. Around the base of each column are user controllers that affect both the music and the laser show which is drawing visualizations on the columns. Although it may be hard for all but the closest spectators to see the keyboards, the columns are visible to all. 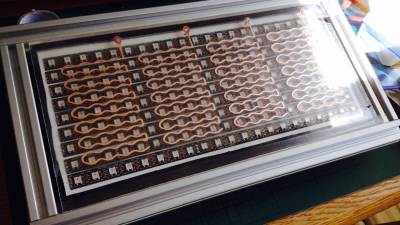 The hardware build for the controller is a great story. You see the finished product at the top of the post. Each key is packed with RGB LEDS. The trick was for Seb to establish a way to incorporate all of those LEDs with a capacitive touch controller that doesn’t obscure the light.

He started with a big pad of copper just to make sure the concept worked. He then experimented with adhesive copper tape, conductive paint, and finally settled on cutting the wavy pattern seen here out of copper foil using a vinyl cutter. It is adhered to the keyboard’s acrylic face-plate using transfer tape. The pattern doesn’t block the LEDs, and connects to the circuit boards with an ingenious use of copper pins and copper sequins that are soldered for a robust connection.

The keyboard is great, but Seb was nowhere near done. He really brought the project to life with some amazing code to make everyone a jazz musician. This comes in the form of custom Ableton Live patches which he demonstrated for us using a volunteer from the audience. They utilize the pentatonic scale to make sure the pitches match with what’s already going on in the music. Rhythm is as much a concern as pitch so he also wrote custom patches to arpeggiate the pitches in time with the beat, and to switch up rhythmic interest as the show plays out. You’ve got to watch Dex, the volunteer with no musical experience, rock out.

Seb proves the skills of an artist have no bounds. It’s wonderful to not only see his end product, but to have him share every single aspect of how he did it through concept, prototype, electronics, enclosure, and software. His talk is a shining example of why you should document your builds at every step of the way. The audience gobbled up his presentation and so will you!

One thought on “Curiously Delightful Things Done With Lasers And Projectors”