[John Blankenbaker] did not invent the personal computer. Museums, computer historians, and authors have other realities in mind when they say [John]’s invention, the KENBAK-1, was the first electronic, commercially available computer that was not a kit, and available to the general population.

In a way, it’s almost to the KENBAK’s detriment that it is labelled the first personal computer. It was, after all, a computer from before the age of the microprocessor. It is possibly the simplest machine ever sold and an architecturally unique machine that has more in common with the ENIAC than any other machine built in the last thirty years..

The story of the creation of this ancient computer has never been told until now. [John], a surprisingly spry octogenarian, told the story of his career and the development of the first personal computer at the Vintage Computer Festival East last month. This is his story of not inventing the personal computer. 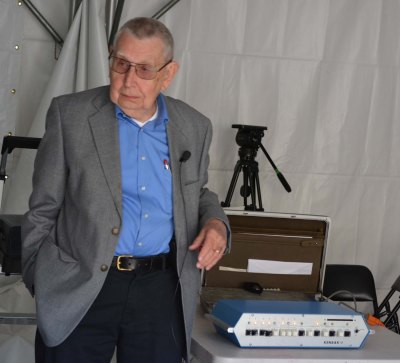 A Career of Small Computer Systems

[John] began his career as an intern working at the National Bureau of Standards in Washington, D.C. He was assigned to the SEAC, a project to build a relatively small computer for the US Government before a much larger computer could be completed.

The SEAC was a small computer, but it was not by any means simple. There were over seven hundred vacuum tubes in the racks, tens of thousands of very expensive diodes for all of the logic. The memory was a set of mercury delay lines — tubes, filled with liquid mercury, with acoustic transducers at each end. These transducers would send pings through the mercury, representing zeros or ones. Because of the speed of sound through this mercury, a small amount of information could be stored, like a gigantic shift register.

There were only a handful of instructions available for this computer – addition, subtraction, multiplication, division, comparison, and an instruction for input and output. There weren’t many instructions, but it was enough; SEAC was the first stored program computer in the United States, and the only computer in Washington, D.C. Everything from calculations needed by Los Alamos to navigation tables for the new LORAN network were created on SEAC.

After working for the National Bureau of Standards, [John] moved on to Hughes Aircraft. His work on the SEAC made him extremely valuable for another small computer – an airborne computer, built in 1952. This was only a few years after the development and commercialization of the transistor, and as such this airborne computer used the latest vacuum tubes, arguably the most technologically advanced vacuum tubes ever made. All the memory was contained in a rotating magnetic drum, and most of the logic was implemented with diodes so expensive they were stored in a safe.

This was the very beginning of the computer age, and as such semiconductors were in short supply. Adding a flip-flop to a design meant the cost of this computer would increase by $500. It was the time of small computer systems, and the architectural limitations of early computers wasn’t because they couldn’t build them bigger; these computers were small because anything bigger would cost too much.

In 1970, [John] found himself unemployed, with $6000 in his bank account from a severance package. He decided if he was ever going to build a small computer, this was the time. He wanted an educational computer — a machine that would teach people how to use a computer. It would have to be cheap, and something that a single person could operate. A personal computer, if you will.

[John] settled on a very basic computer, with an architecture not unlike the SEAC he built 20 years before. There would be three registers, A, B, and X. Five addressing modes complimented a handful of instructions – add, subtract, load, store, AND, OR, a few jumps, conditionals, I/O, and of course a NOP. The memory would be two shift registers configured as serial memory, a much smaller and less toxic version of SEAC’s mercury delay line memory.

With the right architecture in hand, [John] began building his computer. To keep costs low, he went with off-the-shelf parts. The were 132 standard TTL logic ICs, accompanied by two 1024-bit MOS shift registers. The machine had 256 bytes of memory (although the word size was not eight bits), and no ROM. It wasn’t fast, it wasn’t powerful, but anyone could program it by punching ones and zeros into the front panel.

With a design and a few tweaks to the circuit, [John] had a computer. The plan always was to manufacture this computer. That meant sales, and that meant a market.

It’s easy to see the ideal market for the earliest computers would be scientists, academics, and engineers when looking back on nearly fifty years of computer history. Universities were Digital Equipment Corporation’s largest market after the government, after all. [John] designed the KENBAK as a computer trainer, and decided teachers — high school and community college teachers — would be the market where the utility of a personal computer would be apparent.

In May of 1971, [John] trundled out his booth to a convention of high school mathematics teachers nearby. The computer worked, and he had a few programs loaded into the memory, the most memorable of which would give the day of the week for any date in the 1900s. There are eight lights across the face of the KENBAK, and with just a little bit of code, this computer would blink the first light for Monday, the second light for Tuesday, all the way down the line until an invalid date would light up the eighth light.

Apparently, and to [John]’s great surprise, high school mathematics teachers don’t know the rules for the calendar. Nevertheless, he did get a lot of interest from private individuals, colleges, and universities. KENBAKs were shipped around the country, to France, Italy, Mexico, and Canada. Only forty or so KENBAKs were ever sold, with seven units ending up at a technical college in Nova Scotia. Canada.

Recognized As The First Personal Computer

In the mid-1980s, long after selling his inventory off and moving across the country to Pennsylvania, The Computer Museum in Boston — the forerunner of the Computer History Museum in Mountain View, California — announced they were trying to find the first personal computer. These submissions (or more cynically; these donations to the museum) would be judged by a panel of technologists including [Woz], [David Bunnell], the publisher of PC World, and [Oliver Strimpel].

Of course, any attempt to find the first personal computer eventually becomes an argument of adjectives. Computers had existed before 1970, going back to [Konrad Zuse]’s Z3, the Colossus at Bletchley Park, or later the programmable ENIAC. These computers were each firsts in their own way, and technically the Computer Museum produced two winners for their ‘first computer’ contest; the French Micral from 1973 was called, “the first commercially available microprocessor based computer.” 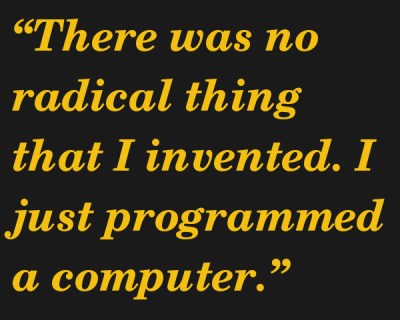 The KENBAK, according to the Boston Computer Museum, The Computer History Museum, and [Woz] himself, was the first electronic, commercially available computer that was not a kit and available to the general population.

Of course, [John] will never say he invented the personal computer. He says there were people who had built computers out of logic chips before him. Those people just didn’t commercialize their computers. There were computers sold to the public before the KENBAK, as well. [John] remembers a computer sold by FAO Schwartz that had a drum with pins and holes, and would complete operations in an automated fashion.

“One of the things that people sometimes say about this is that I invented it. I always say there was no invention, it’s just logic, only ones and twos, that’s all it is,” [John] said closing his talk at the Vintage Computer Festival, “there was no radical thing that I invented. I just programmed a computer.”