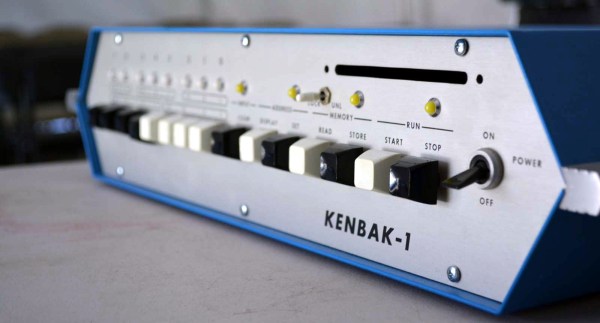 [John Blankenbaker] did not invent the personal computer. Museums, computer historians, and authors have other realities in mind when they say [John]’s invention, the KENBAK-1, was the first electronic, commercially available computer that was not a kit, and available to the general population.

In a way, it’s almost to the KENBAK’s detriment that it is labelled the first personal computer. It was, after all, a computer from before the age of the microprocessor. It is possibly the simplest machine ever sold and an architecturally unique machine that has more in common with the ENIAC than any other machine built in the last thirty years..

The story of the creation of this ancient computer has never been told until now. [John], a surprisingly spry octogenarian, told the story of his career and the development of the first personal computer at the Vintage Computer Festival East last month. This is his story of not inventing the personal computer.

END_OF_DOCUMENT_TOKEN_TO_BE_REPLACED

If you’re looking for a simple Ardunio project, why not replicate the first personal computer?

After discovering the Arduino, [Mark] realized recreating really old computers would be a fun project. An Altair 8800 was on the table, but the sheer number of blinkenlights, switches and the Intel 8080 CPU made that a fairly difficult project. After a bit of searching, [Mark] discovered the Kenbak-1, widely regarded as the first personal computer. The Kenbak also had the added bonus of having a very minimal I/O compliment and was built entirely with TTL components.

Since the Kenbak-1 is an extremely simple computer, [Mark]’s build ended up being fairly minimal. The schematic is only an ATmega328, a few shift registers and a real-time clock for a few added features the OG computer didn’t have. The completed build is programmed by pushing buttons to enter machine code into the mega’s RAM and then executed. [Mark] has a few programs already figured out – a program that counts in binary, a ‘Cylon eye’ and a BCD and binary clock. While the Kenbak-uno doesn’t have the awesome vintage case of the original, it’s still a remarkable build.

Check out the videos after the break for a walk through.