Hamvention was last weekend in Dayton, Ohio. Last weekend was also the Bay Area Maker Faire, and if you want tens of thousands of people who actually make stuff there’s really only one place to be. Bonus: you can also check out the US Air Force Museum at Wright-Patterson AFB. The ‘Space’ hangar was closed, so that’ll be another trip next year.

The biggest draw for Hamvention is the swap meet. Every year, thousands of cars pull up, set up a few tables and tents, and hock their wares. Everything from radios from the 1920s to computers from the 1980s can be found at the swap meet. This post is not about the swap meet; I still have several hundred pictures to go through, organize, label, and upload. Instead, this post is about the booths of Hamvention. Everything imaginable could be found at Hamvention, from the usual ARRL folks, to the preppers selling expired MREs, and even a few heros of Open Hardware.

In 2014, Hackaday did something spectacular. We launched The Hackaday Prize, and gave everyone the opportunity to build Open Hardware with the chance to get paid for the same. The first grand prize winner of the Hackaday Prize was SatNOGS, a global network of satellite ground stations.

SatNOGS was founded after the realization that there are hundreds of cubesats and other amateur satellites being dumped into Low Earth Orbit. Most of these cubesats are from universities, with a few from high schools around the world. Getting data from these satellites requires a ground station, and if each cubesat only has one ground station, that satellite is only usable for a few minutes each day when it passes over home base. 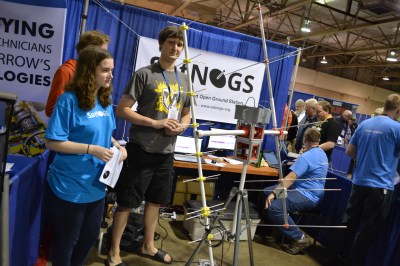 SatNOGS is the solution to this problem. It’s a relatively simple device – just a few antennas mounted to a motorized platform, and connected to the Internet with a Raspberry Pi or BeagleBone. By connecting antennas around the globe to the Internet, the SatNOGS team can schedule observations for each individual ground station. This means more data and better science for every amateur cubesat.

While most of the SatNOGS team is busy with the Libre Space Foundation, the not-for-profit founded with Hackaday Prize money, there was enough cash to send a few SatNOGS enthusiasts out to Hamvention. [Corey], aka KB9JHU, from Bloomington, Indiana and SatNOGS station number two brought the team out. He’s been running his station for a while, and there are a few takeaways from his experiences in operating a 3D printed, robotic antenna for a few years. Printing parts in PLA works, surprisingly. There really isn’t much degradation of the 3D printed gears. Weatherproofing is relatively easy, but bug-proofing is not. There was talk of bees before I phased out of the conversation after realizing I don’t know if I’m allergic to bees. There are more SatNOGS stations coming online, and there should be reasonable coverage over most population centers by the time the Libre Space Foundation puts their satellite into orbit.

Electronic wizard and SDR hipster [Michael Ossman] was at Hamvention, showing off the latest of his SDR goodies.

[Ossmann] is famous around these part for the HackRF One, a software defined radio that’s good from 1MHz to 6GHz. Everything you could ever want is in this band, and the HackRF One transmits, too. He and his buddies were showing off the PortaPack, a ‘shield’, for lack of a better term, for the HackRF One that allows for portable control of the SDR. It’s a display, an old iPod scroll wheel thingy, and a shell to protect everything.

Sometimes you don’t need a good SDR that goes all the way into GHz territory, and for that [Ossmann] has the YARD Stick One. It’s sub-1GHz, based on the IM-Me radio circuit. For the booth demo, the Great Scott Gadgets crew connected a bicycle pump to an MDF box with an acrylic lid. Pop in a tire pressure monitor, and you have an excellent demo for receiving sub-GHz wireless transmissions.

12 thoughts on “The Booths Of Hamvention”