Artificial muscles are, by generally accepted definition, a device or material that can reversibly change its shape as a response to an external stimulus. This shape change can then be used for actuation, imitating natural muscles. In that sense, a simple hydraulic cylinder does not qualify as an artificial muscle, mainly because neither part of it changes its shape in operation. By contrast, a piece of fishing line that changes its length depending on its temperature can indeed be called an artificial muscle. Decades of research have brought forth promising technologies, so when can we start installing them? 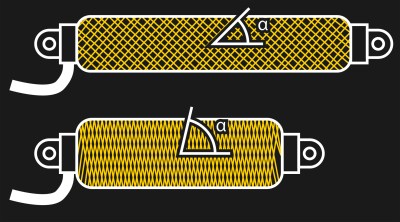 They are known under many names, such as McKibben muscles – after their inventor J. L. McKibben, air muscles, or Pneumatic Artificial Muscles (PAM). In principle, they consist of an inflateable rubber bladder inside a cylindrical, helically wound braid. When air pressure is applied to the bladder, it inflates inside the constraining braid, which redirects the expansion force into a contractive force through changing it’s braiding angle. However, the more the muscle contracts, the steeper the braiding angle gets, and less force is delivered along the muscle’s length axis. This also stresses the braid material, which must withstand several times the contractive force exercised by the muscle.

Additionally, the pressure inside the bladder must be several times higher than the pressure the muscle can exercise in direction of contraction. Even if an extremely strong braid material was used, and the influence of the braiding angle is neglected, the muscle still contracts against it’s internal air pressure, limiting the contraction ratio and force. The more the muscle contracts, the lesser the force it can exercise. Typical contraction ratios can be between 25% and 35% for the unloaded muscle. Of course, a prosthesis or robot based on PAM actuators requires a strong compressor to pressurize its muscles, along with a multitude of control valves. Invented in the 1950s, they are certainly not the latest breakthrough, but PAMs are still experimentally used in robotics. They are cheap, lightweight and accessible, as well as a great starting point for DIY robotics.

Polymer-based artificial muscles save themselves from a lot of the drawbacks of pneumatic artificial muscles. Those materials typically experience a shape change in response to a high voltage electrical field, delivered through electrodes that are attached to the material.

Most EAPs are blends of polymers, copolymers, and oils, assembled in complex 3D geometries. The mixing ratio determines the molecular structure and properties of the material. Ferroelectric or piezoelectric materials are used to obtain their electroactive properties. In terms of strain ratio, strength, and efficiency, EAPs are currently one of the more promising artificial muscle technologies.

Yet, after decades of research, the fundamental obstacle for EAPs is still in place: power output. There are piezoelectric polymers, dielectric actuators (DEAs), electrostrictive graft elastomers, liquid crystal elastomers (LCE), ferroelectric polymers, and many more. Their operation principles are throughout based on intramolecular, intermolecular or electrostatic forces. These forces act on very short distances and decrease disproportionally with increasing deformation. Also, EAPs operate in a single cycle, in which the entire mechanical work output of a full contraction must be delivered: Once an EAP is fully contracted or expanded, it can not perform the same molecular interaction again to contract or expand further.

One solution to this might lie in carbon nanotubes. Their high electrical conductivity, strength and ability to exist in a wide range of densities, from dense bundles to aerogels may unlock new EAP materials in the future. Twisted bundles of carbon nanotubes have been found to electroactively expand by more than 200%, while also delivering a specific power in the range of 50 W/kg, which puts them in the same league as natural muscles.

However, while a variety of EAPs is already commercially available and finds a wide range of application, from noiseless valve actuators to acoustic transducers, carbon-nanotube-based artificial muscles are still a research subject, and not quite a material you can buy and use.

Analogous to EAPs, thermally actuated materials change their shape depending on temperature. The fishing line experiment is a popular example for such a device. It shows that a plain polyethylene string, basically fishing line, is already some sort of muscle: simply by heating it up, it will contract by a few percent. By twisting and coiling up the string, it is possible to create a thermally actuated artificial muscle that can contract by about 50%, and produce up to 4 kN / cm2 of pressure. Unfortunately, a fishing line muscle will contract significantly less under load. Still, their light weight and fast response time – given a fast active heating and cooling system – leads to specific power outputs that may even exceed the performance of natural muscles.

A stronger alternative to fishing line is Shape Memory Alloy (SMA). SMAs are metallic alloys that can change their shape depending on their temperature. This is possible, because Shape Memory Alloys, unlike other alloys, can co-exist in two phases: Martensite and austenite. In its cool state, an SMA remains in the martensite phase and can be plastically deformed. If the SMA is then heated above its transition temperature, it will change to its austenite phase which “remembers” and restores its original form. Even after it cools down again, it will remain in its original, undeformed shape. This operation mode, where the SMA remembers only its original state, is called one-way shape memory. Two-way shape memory can, among other training methods, be achieved by severely deforming the SMA in its cool state. It will then still return to its original state when heated above the transition temperature, but fall back to the deformed state once it cools down again.

SMAs have a variety of application in many industries, and with their strength and longevity, they are also considered for use as artificial muscles. They are not without drawbacks, however. For example, their operation speed is extremely slow when compared to other materials, which limits their overall power output. Also, with high purity Titanium being the main raw material for high-performing SMAs, such as Nitinol, these materials are still very expensive.

Natural muscles transform chemical energy directly into mechanical energy in response to an electrical stimulus. Their efficiency may be low, about 25% “from food to foot”, but considering that they double as temporary energy storage and actually transform 50-65% of the chemical energy delivered to them into usable mechanical work, they serve us well.

On a microscopic level, muscles look more like micromechanical assemblies – not too different from machines and technology that is found in applications today. In fact, the “Sliding Filament Model Of Muscle Contraction” shows many similarities with position-type linear motion actuators.

During the contraction of a natural muscle, the heads of fibrous protein molecules, which may be called myosin motors, repeatedly perform a stroking movement, which is called the power stroke. The repetitive strokes result in a crawling movement, which allows the myosin fiber to actively pull itself in between the actin filaments. The process is fueled by energy-rich ATP molecules, which are decomposed in the process.

This very tiny linear motor is called a sarcomere, and its main mechanical components are the myosin and actin filaments, along with membranes that hold everything together. Each natural muscle fiber is a bundle of countless of these sarcomeres.

At the core of any muscle, the mechanical work is delivered from the power strokes of countless myosin molecules, and this stroke is a chemically induced shape change. However, the actual contraction of a muscle is achieved through repetitive stroking – similar to the crawling motion of some piezoelectric motors – and the ability of the involved components to slide in between each other – similar to a hydraulic cylinder assembly. By combining the benefits of molecular shape change and intermolecular bonding forces with complex micromechanics, natual muscles can produce up to 33 N/cm2 of force while contracting by about 30%. Their power output reaches about 100 W per kilogram of muscle mass. Therefore, natural muscles are still unmet as a benchmark, but EAPs, especially carbon nanotube based compounds, are catching up. It may still be a long way until they find their way into robotics. Still, the potential is there, and right now, it’s a great time to start experimenting with accessible technology, such as air muscles.

17 thoughts on “Artificial Muscles To Bring Relief To Robotic Tenseness”